It has been 41 years since the Gaoth Dobhair band last played at this historic theater in the heart of Ireland’s northwest Irish speaking region – a venue opened only seven months ago after being closed for many years – and they proudly announced upon stepping on stage, “We’re so very glad to be back where it all started.” 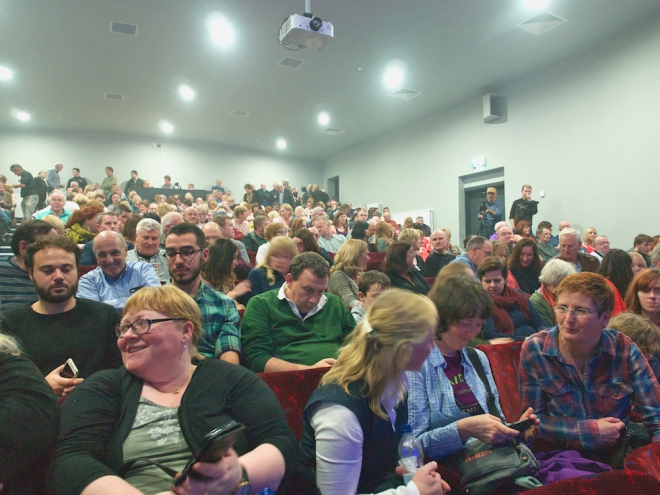 Packed audience at Amharclann prepare for an evening of high-level entertainment.

Moya, together with her brother, Pól, an impressive multi-instrumentalist; a second brother, Ciarán, on double bass and synthesizer; her uncle Noel on guitar and synthesizer; her daughter, Aisling, and guitar, bouzouki and bodhrán, and son Paul on cajon (a native Peruvian instrument) and bodhrán, captivated their packed audience with a unique blend of ethereal Celtic music with modern New Age eclectic fusions and intricate harmonies that have made them famous far beyond Irish shores.

Such was the high quality of the weekend’s two performances, well-known cultural enthusiast and Irish-language teacher, Reuben Ó Conluain, attended both shows. When we happened to meet for post-show drinks afterwards at Leo’s Tavern in Meenaleck, home pub of Clannad and their parents, Reuben, who was involved in designing the new Junior Cycle Specification for Irish, introduced to post-primary schools last August and has also brought over hundreds of Irish musicians to the annual Festival Interceltique in Lorient, Brittany, told me enthusiastically, “I went to the first performance on Friday and it was just so good, I had to go again on Saturday.”

Another welcome audience member was Linda Ervine from Belfast, sister-in-law of the late unionist politician David Ervine. Linda introduced ‘teanga Gaeilge’ to the capital by setting up Irish language classes in loyalist parts of east Belfast.

Kudos to acting theater director, Pól McCool, a teacher at Pobalscoil Ghaoth Dobhair (Gweedore Community School), and all the volunteers and board members at Amharclann for making the first seven months of the theater so successful, with such diverse performances such as Laurence McKeown writer of play ‘Green & Blue’ has led an intriguing life and ‘AON’ – an exhilarating dance performance that teases out meanings.

For those not overly familiar with Clannad, especially people from other countries – the Saturday’s audience reflected a multi-national flavor, with Germans, Dutch, English, Americans and Romanians in attendance – special images and text on the screen in the theater’s café explained the group’s evolution from a local singing family to mega-stars. 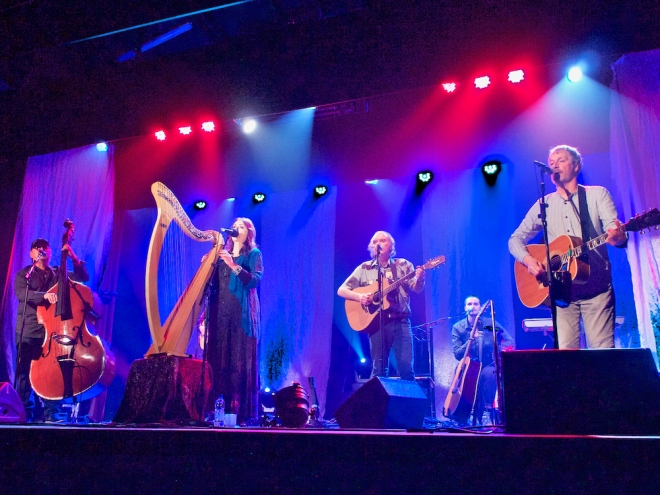 In short, as explained there, Clannad won a competition at a Letterkenny folk festival in 1973, with ‘Liza,’ a song written by Pádraig Duggan (uncle of Moya and siblings who sadly died last year), who described it as “a pop song in Gaelic that I wrote sitting on the rooftop of Leo’s Tavern.” The prize was a record deal with Philips, and thus the band turned professional.

With strong musical influences from such well-known groups of the time as The Beatles and The Beach Boys, Clannad translated pop songs as Gaeilge, a pioneering accomplishment back then. In 1982, a major breakthrough occurred when the group’s album ‘Magical Ring’ was released with the song ‘Theme from Harry’s Game’ on it, written by Pól for the Yorkshire Television series ‘Harry’s Game,’ set during the Northern Ireland conflict. The song reached Nr. 5 in the UK singles chart and Nr. 2 in Ireland. The group’s later 1985 album ‘Macalla’ included a duet between Moya and Bono of U2 on ‘In A Lifetime.’ In 1997, their ‘Landmarks’ album won them a Grammy.

Saturday’s musical evening, wonderfully hosted by Áine Ní Churráin, kicked-off with an excellent 30-minute performance from ‘home-grown’ guitarist-singer-songwriter, Emma Ní Fhíoruisce, one of a number of young local people taught their musical prowess by Caitlin and PJ Joe Jack Curran at An Crann Óg community center in Bunbeg, and now working on her debut album.

Emma’s impressive repertoire ranged from a doleful ‘as Gaeilge’ rendition of a classic Bob Dylan song about (naturally) heartbreak; a composition of her own – in effect, a musical eulogy – on the death of a close friend and its effect on her; a mellifluous ballad about her beloved native Gaoth Dobhair; and an ‘as Gaeilge’ version of the Marvin Gaye hit ‘I Heard It Through The Grapevine.’ The fact that Emma had audience members clicking their fingers and joining in on the choruses attest to her on-stage talent.

Stroking the harp strings beautifully, Moya introduced the first Clannad song of the evening – ‘Crann Úll’ (Apple Tree), from the group’s fifth album of the same name, released in 1980, about the ‘Tree of Life’ and the need for people to support each other. Other traditional tunes followed including the waulking song ‘Mòrag’s na hóro èile.’ Such songs were chanted by people as they beat newly woven tweed rhythmically against a table or similar surface to soften it. A waulking session often begins with slow-paced songs, with the tempo increasing as the cloth becomes softer.

Two songs from Tory Island enlivened the proceedings even further, ‘Na Buachaillí Alainn’ (The Beautiful Boys), with an angelic harp intro, and the tribute to drinking ‘Níl ‘na Lá’ (It’s Not Day Yet).

Not all songs were ‘as Gaeilge,’ with a melodic rendering of the musical version of the immortal W.B. Yeats poem ‘Down By The Sally Gardens’ and the naughty, mischievous ‘Two Sisters,’ about the unforeseen complications of wayward love, including death by hanging and being boiled in lead. 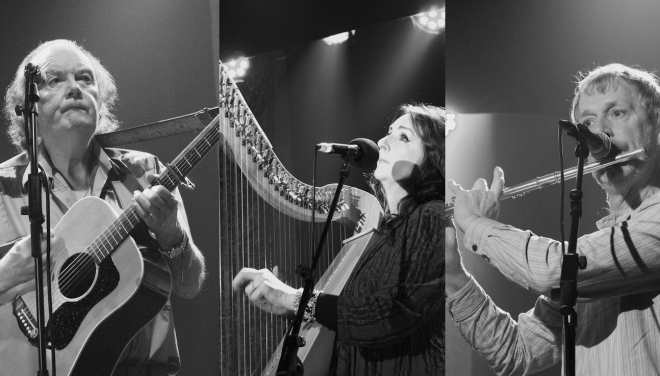 While Moya held center stage through her mesmerizing voice (no more so than on the haunting ‘I Will Find You’ which featured in the movie ‘Last Of The Mohicans’) and her delicate harpist skills, each member of the group played their role skillfully in the success of the evening. Aside from being a lively on-stage presence, Pól seems at ease on any instrument – picking up tin whistle, guitar, bodhrán, synthesizer and flute at will, not to mention having a fine singing voice.

Being a Pagan-like evening of music, ‘Newgrange,’ a song about the ancient Druidic site in County Meath, written by Ciarán and released in 1982 on the album ‘Magical Ring’ and in 1983 as a single, seemed more than appropriate. The quiet guitarist’s musical flare also shone through in his take on ‘Liza,’ the encore, written by the late Padraig. Launching into the melody with verve and looking all the while like a cross between an aging Elvis, Johnny Cash and Van Morrison, with a Mr. Pickwick hairstyle, Ciarán rocked the venue with his nifty country lickin’ guitar work.

‘Téir Abhaile Riú’ (Go Home With You) provided a grand sweeping finale to a most agreeable harmonious evening. With two days of packed audiences, some from different countries, to say Clannad will be welcomed back soon to their old hunting grounds is a severe understatement.

“These kind of events (‘Goitse go Gaoth Dobhair’ festival and ‘Forgotten Land, Remembered Words’ Ireland Writing Retreat‘) reflect cultural tourism as its best. With a rich tapestry of culture, history and legend in Donegal, the powers that be should be investing heavily in these kinds of activities. Any other place in the world would be delighted to have such a rich background as a platform to promote tourism and the economic benefits it brings.” Jane Gilgun, Professor of Sociology, University of Minnesota and participant at the recent writing retreat 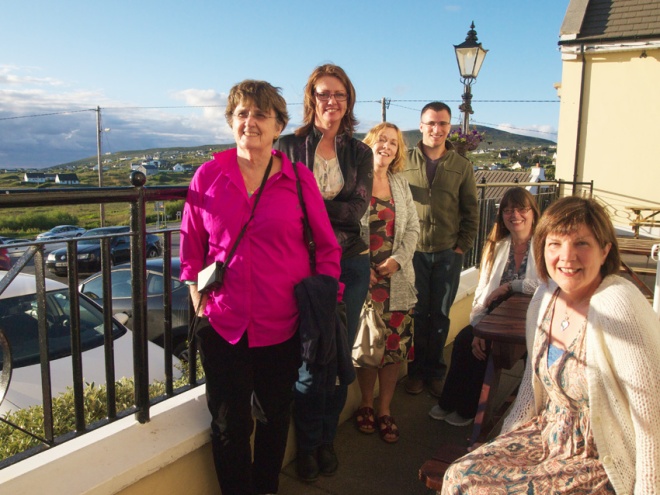 From creative writing workshops and authors’ talks to ceildhe dancing, from hillwalking to studying the secrets of lyric writing, from performance of Irish sean–nós singing to learning ‘cúpla focal’ as Gaeilge and insights into Celtic mythology – such were some of the experiences of international participants at the inaugural ‘Ireland Writing Retreat’ held last week in Donegal. 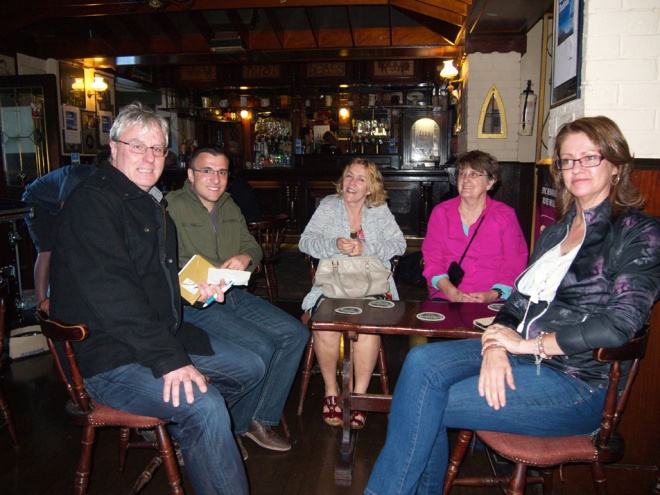 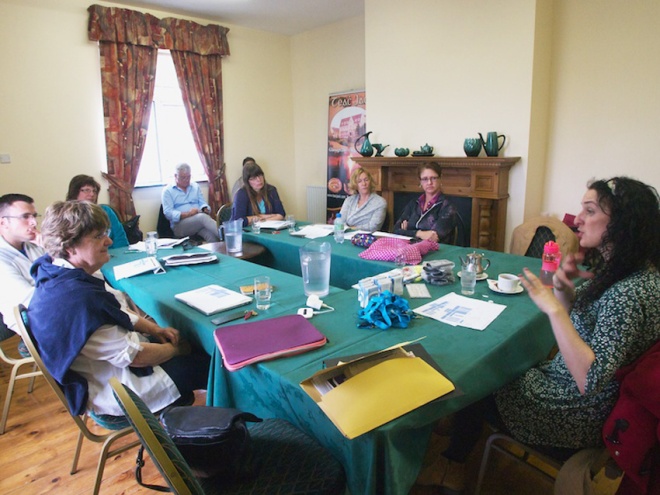 Noeleen ni Cholla, sings sean-nós and explains to guests about the activities of Foras na Gaeilge.

While most of the creative writing, language, music and dance classes took place inside Teac Jack’s in Glassagh, participants also enjoyed hiking around the base of Lugh’s Mount (Errigal) where they learned about native flora, local history and Celtic legend. Time spent at Leo’s Tavern in Crolly, Teach Hiúdaí Beag in Bunbeg and a day over on Oileán Ghabhla (Gola Island) during the ‘Goitse go Gaoth Dobhair’ festival added to the depth of their overall experience. 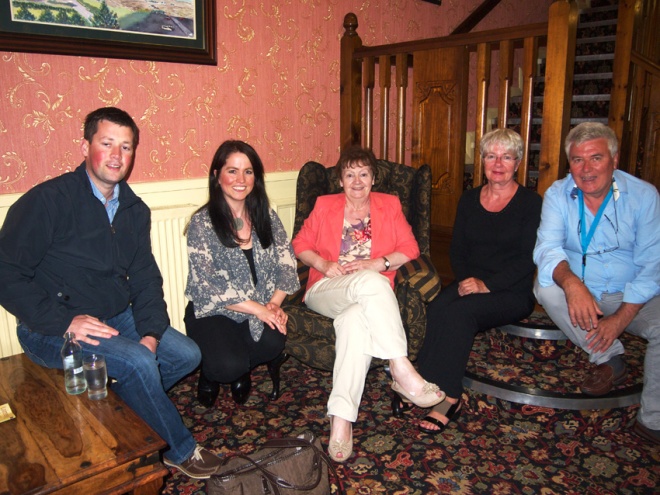 For those unable to attend the week-long ‘Forgotten Land, Remembered Words’ Ireland Writing Retreat, here is a reproduction of a feature story published in Monday’s ‘Donegal News’ indicating some of the many highlights from it. 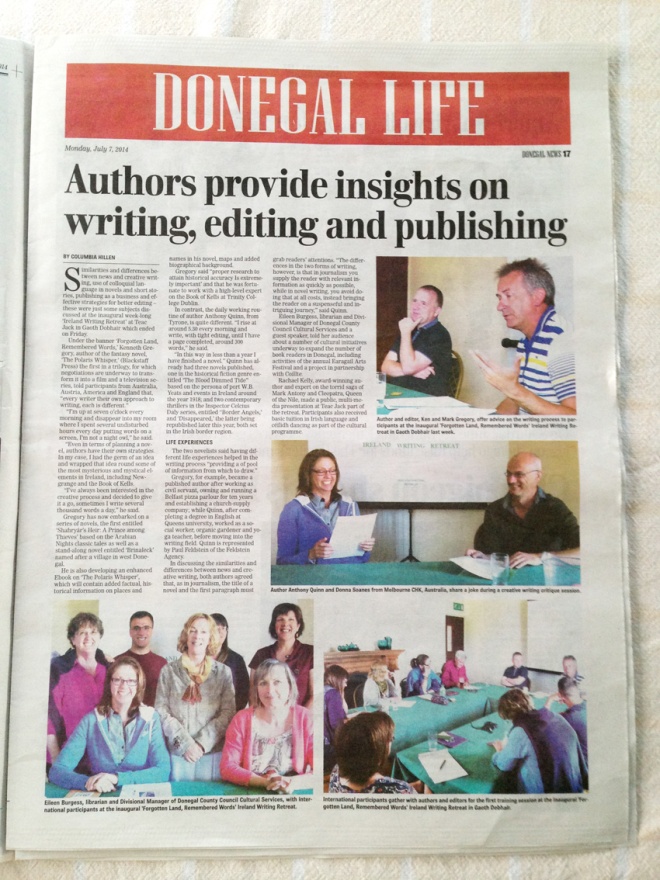