With gray beard, tousled hair and wrinkled coat and pants, writer Michael Harding descended upon Donegal Friday night looking all the world like the modern risen Messiah and promptly mesmerized his disciples.

As one who enjoys a night at the theatre  – pointing my rickety but faithful jalopy weekly out my pebble-stoned driveway enroute to one venue or another – it has been a long while since I last saw An Grianan theatre so packed (a shame really as it hosts so many enjoyable performances).

On this occasion, rightly, theatre director Patricia McBride and her marketing adjutant, Daithi Ramsay, should be marching triumphantly all the way to the bank. Or at least to the office of Traolach O’Fionnan, arts officer at Donegal County Council, with hands outstretched for a somewhat larger annual stipend.

So what magical message did the Messiah from Cavan (via Leitrim) bring northwards to have created such a keen fan base that left nary a seat unoccupied. Notwithstanding the writer-cum-playwright-cum-columnist-cum-actor’s obvious charisma, down-to-earth homeliness and ageless, sage-like physical bearing, I’ve narrowed his popularity in Donegal down to several things – 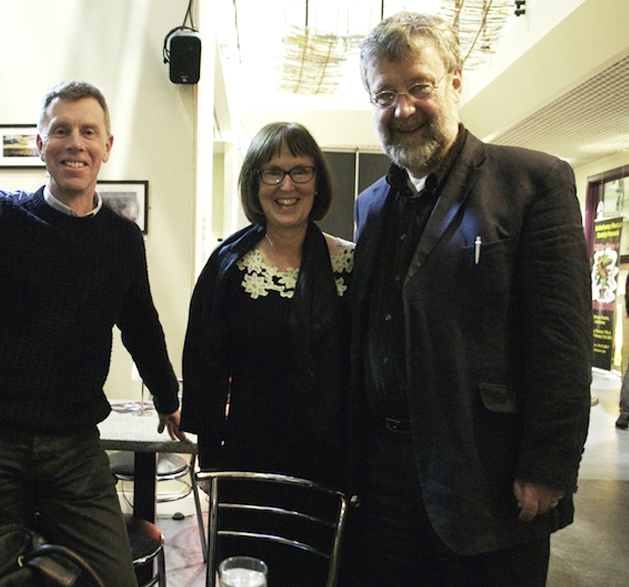 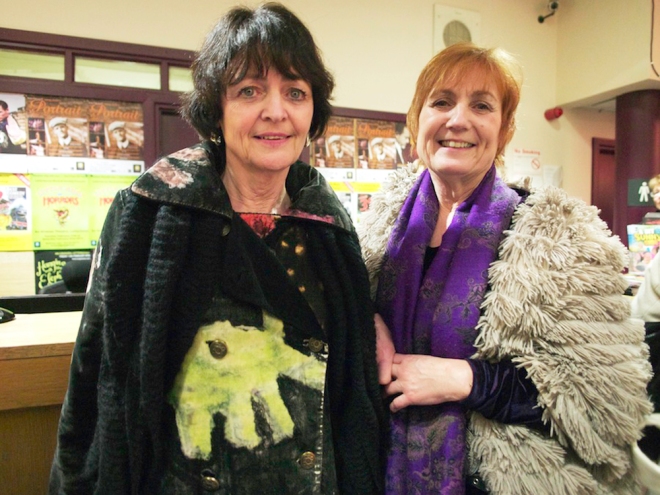 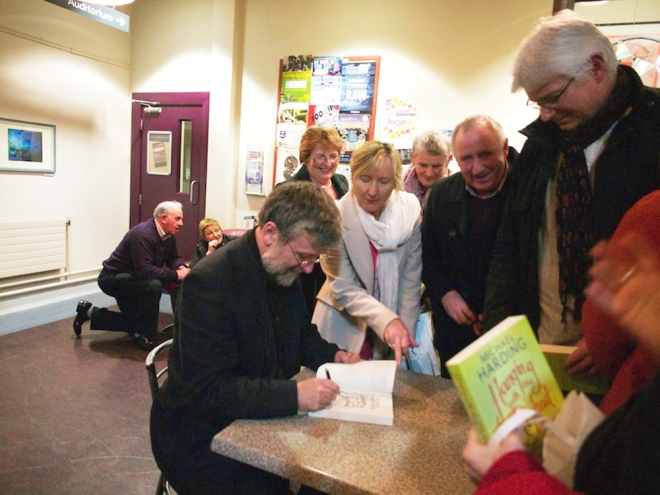 Overall the evening with Michael Harding was a most enjoyable occasion ripe with amusing, philosophical ramblings that left the audience departing the theatre wrapped in added layers of warmth to fend off the cold, biting weather outside.

With but a mysterious suitcase on the floor stage centre, a padded armchair and his lectern as props, Harding took his listeners on a delightful stroll down ‘Nostalgia Avenue,’ his deft turns of phrase encapsulating many-layered meanings in a flurry of simple-seeming words.

His ability to mix ‘n match moods, swinging rapidly from melancholy to bittersweet to outright hilarity was impressive, all part and parcel of personal anecdotes gleaned from the trials and tribulations of his own life. One illustrative example was when he described how his mother would make him wait in the street in front of a draper’s shop while she went in to buy “women’s things” leaving him “to develop childhood neuroses outside,” then in response to the shop-owner asking if he was her son, she’d say yes but that she would have preferred a daughter.

And how, not having sisters, it took a visit by three Letterkenny girls to his home for him to see “women’s things” first-hand. “Their bras hanging in the bathroom like a line of dead rabbits,” as he amusingly put it.

The writer’s description of rummaging through his mother’s belongs soon after her death was emotive by its sheer simplicity. “I found my dead mother in little boxes and drawers,” he said, before recounting exactly what he found.

Harding’s terse turns of phrase can be poetic as when he talks about his Aunt Molly, as “a woman like a tree with so many shaking bits” or love in Cavan as “not many hugs but a lot of apple tarts and extra portions of potatoes.” Or even a dead chicken hanging on an assembly line in a meat factory as “wrinkled and naked like an old man’s neck.” His sharp observations of everyday life are also impressive as when he describes his uncle sleeping as “heavy on the bed like a hammock” or the danger of men “having ideas” especially in the toilet, leading him to warn women to beware of men emerging saying, “I was just thinking…..”

His insights on Irish rural life are delightfully illuminating whether they about the tradition of “throwing cocks over neighbours walls” to keep a healthy gene pool or the differences between the rural walk (“with chakras open”) and the urban one – both of which were accompanied by amusing on-stage simulations. Or even the annual ‘Blessing of the Graves” which he describes as, “Getting out the deckchairs and sitting on top of the dead to keep them down.” 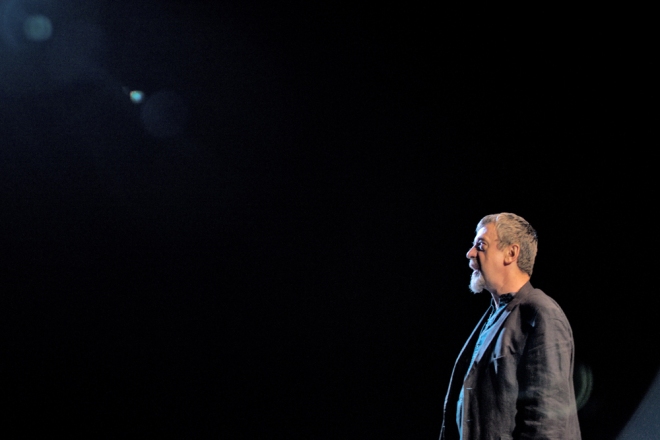 Harding, not surprisingly, has a love for his native Cavan, though he admits, with himself foremost in mind, that, “you’re not going up in the world merely by going from Cavan to Leitrim,” adding that he is more “a refugee seeking asylum.”

An oft-quoted saying is that ‘one can never go back home,’ but Harding achieves the next best thing, resurrecting vivid memories of places and people from his past that help bring an audience on an enjoyable and entertaining journey of nostalgia.