‘People have no right to ask how we spend their money.’

That’s the attitude of Údarás na Gaeltachta, which has once again refused to release key information about how it spends public funds.

A Senate committee revealed that Údarás pays millions of euro every year in pensions to former executives, some of whom were local Donegal employees including Cathal MacSuibhne, former regional manager based in Gaoth Dobhair.

Sinn Fein’s Trevor Ó Clochartaigh, a member of that Senate committee, exclaimed, “I nearly fell off the chair when I heard that almost half the current expenditure goes on pension payments to 136 people who are no longer employed by the organisation. Small wonder Údarás is not able to function more effectively.”

He added, “This raises serious concerns regarding the levels of monies being paid and who is receiving them.”

Under transparency rules, other public bodies have made a breakdown of such pension figures available for examination, but in response to a Freedom of Information (FOI) request I made, Údarás refused to do so, citing gobbledegook about data protection.

As a result, having brought the matter to the attention of a number of TDs, the Údarás pension issue has risen to the highest levels of national government, to the office of Brendan Howlin, Minister for Public Expenditure.

I can reveal in this blog that on my behalf various leading politicians including Public Accounts Committee (PAC) member, Mary Lou McDonald, have attempted to find out the individual pension figures but Údarás has stonewalled every request, preventing their release.

Údarás responded to my initial FOI request last year seeking details on pension and lump sum payments to former executives in a letter signed by Padraic O’Conghaile – a ‘cinnteoir’ at the organisation’s headquarters in Galway.

In the letter, he wrote, “I am refusing these records as they relate to the pension of an individual under Section 28.1 (Personal Information). The FOI Act defines personal information as information about an identifiable individual that: ‘would, in the ordinary course of events, be known only to individuals or members of the family or friends, of the individual.’ I believe that the right to privacy of these persons with regard to such information far outweighs any public interest there may be in this matter.”

The fact, that all the pensions and payments are publicly-funded and thus not “known only to individuals or members of the family or friends, of the individual” as he asserts – did not seem to enter Mr. O’Conghaile’s thinking. Or, perhaps, did, but he refused to acknowledge it.

Following this response, I requested several TD’s to present formal written parliamentary questions in the Dail on the same issue.

For example, Mary Lou McDonald, a member of the Public Accounts Committee (PAC), submitted her parliamentary question to the Minister for Arts, Heritage and the Gaeltacht asking the Minister to “reference the specific provisions of the Data Protection Acts 1988 and 2003 to which he referred (supporting Údarás’ denial of information); the basis on which he believes Údarás na Gaeltachta does not, unlike in the case of all other senior managers across the civil and public sector, have to make public the details of public service pension arrangements on retirement for senior management.”

Dinny McGinley, then junior minister, wrote back in a vague response saying simply that Údarás had informed him it was “a data controller, defined under the Acts as a person who either alone or with others controls the contents and use of personal data.”

Put in simple words, it means Údarás, while deriving all its funding from public money, considers ‘People have no right to ask how we spend their money.’ McGinley’s response also has no logical meaning whatsoever under present Irish law. Instead it is a classic delaying tactic. The former Minister did not bother to question it or seek elaboration.

That response led McDonald to submit a follow-up question, this time to Minister Howlin, reading, “given the Minister’s stated commitment to transparency and accountability in the spending of public monies, whether in his view it is acceptable for a public body fully funded by the exchequer to withhold from the public record details of public service pension arrangements on retirement for senior managers; and if he is prepared to legislate to require all publicly funded bodies to make such information public in the interests of open government.” 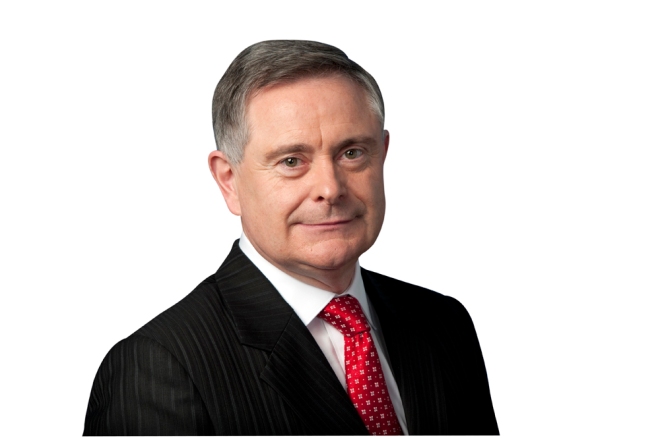 It is most disappointing that a simple request to a fully publicly funded body about its spending has led to such a reactionary response from an organisation such as Údarás, which is responsible for the economic, social and cultural development of the Gaeltacht.

Such utter lack of transparency and disregard for public concerns has already led to such widespread corruptive practices as those at FAS when it was discovered hundreds of thousands of euro went on lavish holidays including first-class travel and expensive rounds of golf for executives and their wives. Údarás itself has yet to account for trips paid out of public funds for board members, executives and wives to visit attractive international destinations, including Las Vegas.

Public money is a precious thing and every penny of it ought to be properly accounted for and judiciously spent.

I will reprint Minister Howlin’s response on this blog when it is received. It should provide a most interesting read.

Meeting someone who travels the world investigating fairytales and a Gothic expert who specialises in all things spooky and supernatural as well as seeing a vampire killing kit – these were among highlights of my pre-Halloween sojourn this past week in Dublin.

Asked to give a lecture separating historical fact from literary fiction associated with Irish author, Bram Stoker, his arch character, Dracula, and medieval warlord, Vlad the Impaler, I was delighted to stand Saturday afternoon before a capacity audience in the Mansion House, the Lord Mayor’s official residence, relating my adventures researching ‘Digging for Dracula.’

Imagine my surprise when confronted by Dracula Junior and his mother in the ghostly grounds of Dublin Castle last Friday night.

Now an annual event, the Bram Stoker Festival took place at various suitably atmospheric venues including the eerie, shadowy Chapel Royale inside the grounds of Dublin Castle and the Samuel Beckett Theatre deep within the cobbled-confines of Trinity College, where Ireland’s 19th century best-selling novelist was once a humble student.

(l to r) Enjoying the company of Vanessa Fox O’Loughlin founder of the Inkwell Group and organiser of the festival’s literary programme; Professor Bill Hughes, Bath Spa University; and Angela Dinu, an authentic Transylvanian from Brasov.

Such is the fascination with Stoker’s immortal long-toothed Transylvanian Count, the festival events earlier this week attracted hundreds of people, both speakers and participants. Before and after my talk I was approached by people from places as diverse as Rome, Warsaw and Las Vegas, all keen to discuss ‘beyond-the-grave’ mysteries.

Christa Thompson, from Florida, travels throughout the world investigating and writing about folk stories, while Ed Mooney, from Kildare, combines his passion for photography with his deep interest in history, ancient sites, folklore and mythology. Much of Edwards’ free time is now spent traveling around the Irish countryside in search of his next adventure, which he fondly refers to as ‘ruin-hunting.‘ 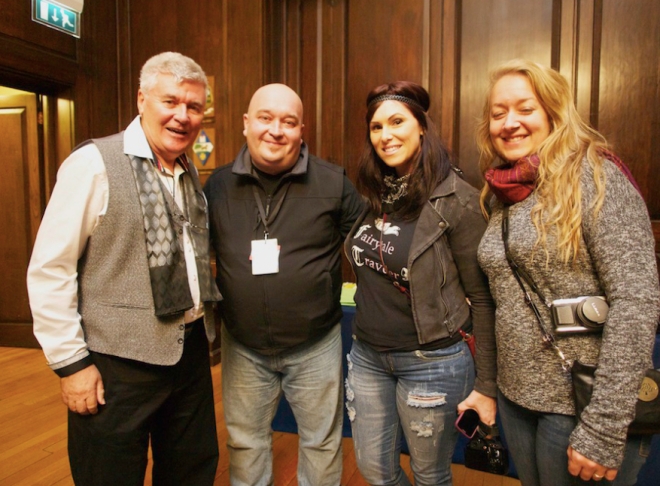 (l to r) In the delightful company of Intrepid folklore investigators from Ireland and the US.

Lara Musto, a highly-qualified librarian and researcher, originally from Rome was among the participants. She said she had been fascinated by Bram Stoker’s work ever since she was a child, “Believe it or not, my father used to read me vampire stories at bed-time, and they helped me sleep. So you can imagine, I’ve really enjoyed the talks I’ve attended here in Dublin during the festival.”

Asked the inevitably question whether I believed in the infamous nocturnal blood-sucking creatures (known as ‘strigoi’ in Romanian folklore), I answered, both evasively and diplomatically, I must admit: “Just because something is written about doesn’t mean it’s true. But then again, just because we don’t see something doesn’t mean it’s not.” What else could I say? Not having seen either Donegal fairies or Transylvanian vampires, I remain doubtful but very much open-minded.

Credit must go to the Bram Stoker Festival organisers who provided a plethora of delightful activities for everyone. These ranged from walks with experienced guide, Pat Liddy who brought to life spine-chilling tales such as Stoker’s ‘Dracula;’ Irish Gothic writer Sheridan Le Faanu’s ‘Carmilla’ and Oscar Wilde’s ‘The Picture of Dorian Gray;’ book readings and a cosy Q&A with authors Lynne Truss  and Joanna Briscoe who penned ghostly tales for Hammer Classics, an imprint of Random House; and lively music every night. Light-hearted humor was the hallmark of a funky ‘Literary Death March’ at Smock Alley Theatre, where writers such as Lynn Shepherd read their work and competed with others before a panel of judges, with audience participation in a rousing literary quiz finale.

Flying witches, goblins and vampires – all part of the Bram Stoker Festival in the Oak Room of the Mansion House in Dublin.

The festival – sponsored by Failte Ireland and Dublin City Council – also featured a tantalising discussion entitled ‘Madness and Sexuality’ at which Paul Murray, a former cultural attaché at the Irish Embassy in London and a Stoker biographer, and two doctors, one a psychiatrist, discussed Stoker’s state of sanity when he penned his macabre bestseller.

Much to my surprise, the ‘vampire killing kit’ was among strange artefacts at a special exhibit entitled ‘BLOOD’ at the Science Gallery beside Trinity College, hosted to coincide with the Stoker festival. The ‘kit’ was neatly arranged inside a glass case and included a gun with silver bullets and a hammer and wooden stake (best, I suppose, to be prepared for all eventualities).

Gun with silver bullets, a crucifix and a hammer with wooden stakes of various sizes – all elements in a vampire killing kit.