For me living in the Gaeltacht region of Gaoth Dobhair in northwestern Ireland, the most surprising thing emerging from the recent, well-organised and stimulating ‘Belfast Book Festival’ was the number of novels set or inspired by little ol’ Donegal, the so-called ‘Forgotten County.’

Until then, I had been used to reading locally about publication of novels in our native language being funded by the various cultural groups such as Foras na Gaeilge, but hadn’t really thought too much about the diversity of English-language novels set or inspired by the beauty of the county (aside from Brian Friel’s plays), nor the use of phrases ‘as Gaeilge’ in such novels.

I know I’ll be accused of heresy and probably burned under a heather bush on the shadow of Lugh’s Mountain (otherwise known under its Christian name, Errigal) for suggesting this, but with the use of Irish diminishing in everyday conversation, should the various language groups not ease their overly-tight qualification criteria and fund publication of English-language novels that have some Irish phrasing in them? 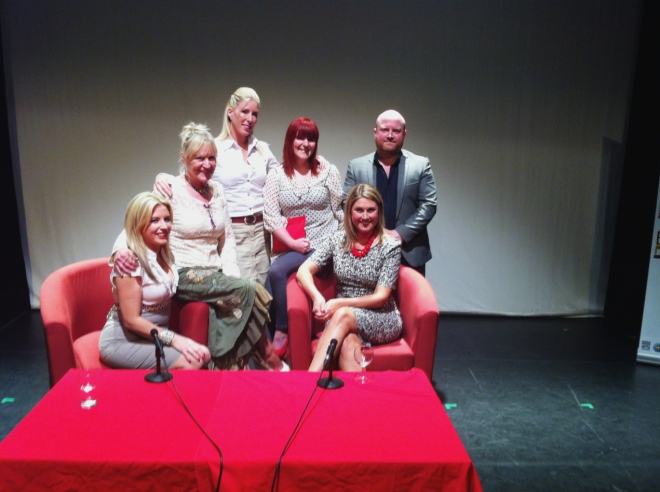 To my mind, it seems like not just a very reasonable suggestion, but a most innovative one that delivers many benefits. Books in Irish, by their nature, are for people who already speak and read our native language. Yet what we desperately need is to encourage non-Irish speaking people to become interested in our language and hunger to learn more. As English is one of the world’s leading languages, are not novels in this language not a perfect place for Irish phrases to be included to help achieve this aim? Will that not help expand use of Irish, both domestically and abroad? Such a linguistic/literary initiative would also help support economic development, especially through tourism, by attracting more visitors to Donegal and other such Gaeltachts. Such areas – while on the whole, providing inspiring land and seascapes – tend to be marginalized, unemployment black spots on the map of Ireland.

The landscape of the Outer Hebrides, with its stark cliffs, ghostly mists and lonely beaches, has become a definitive character of Peter May’s Lewis trilogy entitled ‘Hebrides’ and has helped revitalize tourism in that part of Scotland. 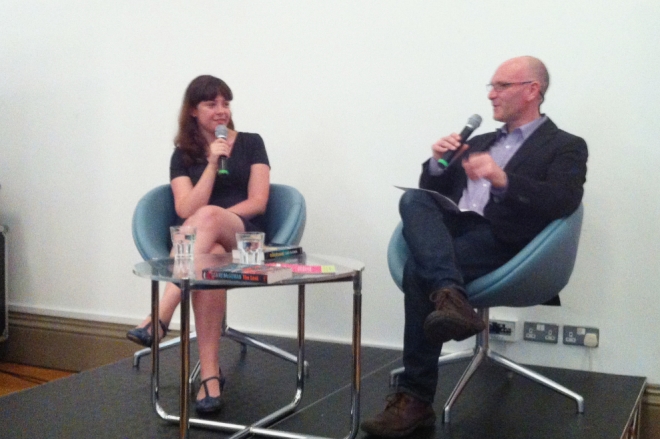 Crime fiction writer, Claire McGowan, with David Torrans of Belfast’s ‘No Alibis’ Bookstore at the Ulster Hall, talking about her genre and her work.

Anyway, back to the most enjoyable ‘Belfast Book Festival’ and novels set in the beautiful countryside of Donegal. Take the delightfully funny writing of Emma Heatherington and her book ‘One Night Only’ about four desperate housewives who take off in a car for an outing to the ‘Forgotten County’ and the hilarious, and poignant, consequences. Emma, who is due to speak next week at Ireland’s newest Writing Retreat in west Donegal is a multi-talented woman whose work ranges from novels to short stories to scripts and screenplays, including ‘Since You’ve Been Gone’ and ‘Playing the Field.’ Her personal ‘growing up’ story of having to become ‘Mum’ to her siblings as a young teenager after her own mother’s untimely death is touching. Aside from her literary output, one can’t help but admire Emma greatly. And she’s a natural, engrossing speaker to boot.

Then there’s Kenneth Gregory, fantasy novelist and mythologist extraordinaire with character names as Gaeilge, perhaps Ireland’s answer to the R.A. Salvatore/ Robert Jordan/ Marion Zimmer Bradley combo. His debut novel ‘The Polaris Whisper,’ the first in a trilogy, was published by Blackstaff Press. He will also speak and teach at Donegal’s ‘Forgotten County, Remembered Words’ writing retreat. Negotiations are now underway for the novel to be turned into a television series with a movie option. His second novel in the series is ‘The Poison of Newgrange.’ ‘Shahryár’s Heir: A Prince among Thieves’ is his first fantasy novel in a re-invention of the Arabian Nights’ stories.

Speaking together, he told me, “It is an honor to speak at such an event as the Ireland Writing Retreat. Northwestern Donegal is an awe-inspiring place, with an intriguing, colorful history packed with legends. So enthralled am I by the area that the third book in my trilogy, a modern-day thriller, has the working title of ‘Brinlack,’ a place beside Bloody Foreland. My best editor, my brother, Mark, lives there and I visit often.”

Then there’s the lady who shares my name, Sophia Hillan, former associate director of Belfast’s Institute of Irish Studies and director of the International Summer School in Irish Studies. During an hour-long interview, Sophia told me about how she came upon a scrap of paper that led her to produce a most fascinating Donegal-based, non-fiction book entitled ‘May, Lou and Cass: Jane Austen’s Nieces in Ireland,’ published by Blackstaff Press in 2011. Her first novel ‘The Friday Tree’ has now just been published by the same publishing group and is set within a stone’s throw of where I grew up and lived for many years in Andersonstown, west Belfast.

That’s a lot of Donegal-based writing crossing so many genres, not to mention the many books written about Donegal’s very own mystic monk – Columba – including those by authors Máire Herbert  and Brian Lacey  – more of which will be written about in my next blog.

Of course, not all the authors and books at the ‘Belfast Book Festival’ were linked to Donegal. Head honcho of the Crescent Arts Centre and festival director Keith Acheson and his hardworking team, including marketing director Tracy O’Toole and outreach and education director, Ann Feely, as well as community arts development officer, Jan Carson, (her novel is entitled ‘Malcolm Orange Disappears’) and her colleagues at the Ulster Hall, deserve full praise. They brought together a diverse collection of writers in various genres who spoke on such wide-ranging subjects as ageing and sexual politics (Lynne Segal – ‘Out of Time: The Pleasures and the Perils of Ageing,’ ‘Is the Future Female?,’ ‘Slow Motion: Changing Masculinities, Changing Men,’ and ‘Straight Sex: The Politics of Desire’); murder most foul (Claire McGowan – ‘The Fall,’ ‘The Lost’ and ‘The Dead Ground,’ some of which use phrases ‘as Gaeilge’); matters of the heart and mind (Joseph O’Connor ‘Inishowen,’ ‘Ghost Light,’ ‘The Thrill Of It All’ and ’Star of the Sea’); and guardian angels (Carolyn Jess-Cooke – ‘The Guardian Angel’s Journey’ and ‘The Boy Who Could See Demons’), as well as providing publishing and public speaking advice through guests such as the lovely actress and teacher Rosie Pelan; the inimitable Ian Sansom (Mobile Library Series including ‘The Case of the Missing Books’ and ‘Mr. Dixon Disappears;’ and self-publishing guru, Alison Baverstock (‘Is There A Book in You’ and ‘Marketing Your Book: an author’s guide.’).

Agents and publishers, including Clare Alexander of Aitken Alexander (r), Patsy Horton (c) and Alice Kate Mullen (l) of Carcanet Press, discuss their roles and responsibilities in the writing field.

In terms of diversity of writer and subjects, the week-long series of events surpassed most such festivals I have attended – and I have been to many, including both the Salon du livre Paris and the London Book Fair. Also – beyond just the world of books – the festival reflects the emergence of Belfast from its enforced dormancy as a dynamic and attractive city with many options for would-be visitors, from cozy, atmospheric cafes, terrific restaurants and avant–garde and traditional theatres such as The MAC and the Lyric.

By the way, other speakers at the Donegal writing retreat which begins formally on Sunday, June 28th between An Bun Beag and Bun an Leaca (on which there are only four places left) include ‘Antony-Cleopatra’ expert Rachael Kelly and award-winning author Anthony Quinn and former detective-cum-writer Martin Ridge who lives near Falcarragh. 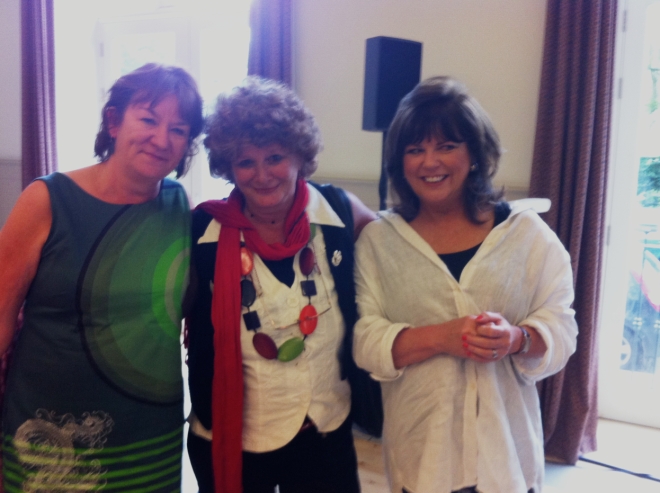 As fiesty and stimulating as ever, author, socialist, feminist and civic leader, Lynne Segal greets her avid admirers.

Rachael, a native of Belfast has become the foremost expert on the age-old romance between Roman leader, Mark Antony, and Egyptian Queen Cleopatra (made famous on-screen by Elizabeth Taylor and Richard Burton) after completing her doctorate in film studies on it. Rachael has also penned the first novel in a trilogy on the two historical figures entitled ‘Queen of the Nile,’ set in 1st-century-BC Alexandria. Rachael’s earlier novel, ‘The Edge of Heaven,’ won the Irish Writers’ Centre Novel Fair Competition 2014, while her short story, Blumelena, was shortlisted for the Bridport Prize 2012. Her ‘Long Anna River’ won the Orange Northern Woman Short Story Award and was later featured in an anthology called ‘The Barefoot Nuns of Barcelona,’ while ‘The Night Sky In November’ was runner-up in the White Tower Publishing Short Story Competition. Her poem, ‘A Five Yard Odyssey,’ won ‘The Battle of the Bards.’ 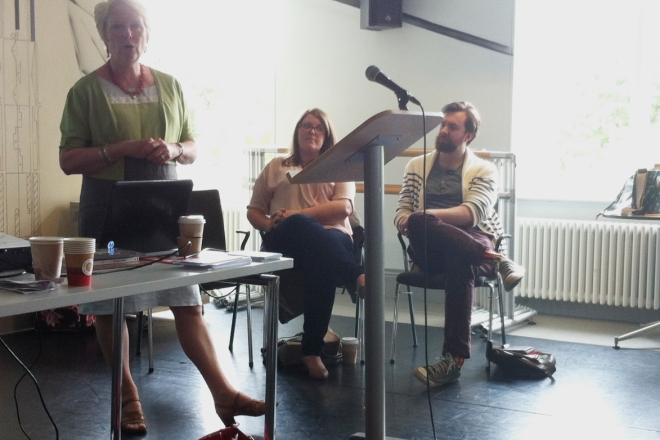 Alison Baverstock, publisher, trainer and writer, talks about the advantages and pit-falls of self-publishing, accompanied by successful self-publishers at Belfast’s Crescent Arts Centre.

Anthony Quinn was born in 1971 in Tyrone and his short stories have been short-listed twice for a Hennessy/New Irish Writing Award. He was also the runner-up in the Sunday Times New Food Writer competition. ‘Disappeared‘ is the title of his first novel. Published by Otto Penzler’s Mysterious Press in 2012, it was was shortlisted for a Strand Literary Award, as judged by book critics from the LA Times, the Washington Post, the San Francisco Chronicle, CNN and the Guardian. It was also selected by Kirkus Reviews as one of the top ten thrillers of 2012. BORDER ANGELS, the sequel, was published by Mysterious Press last year. 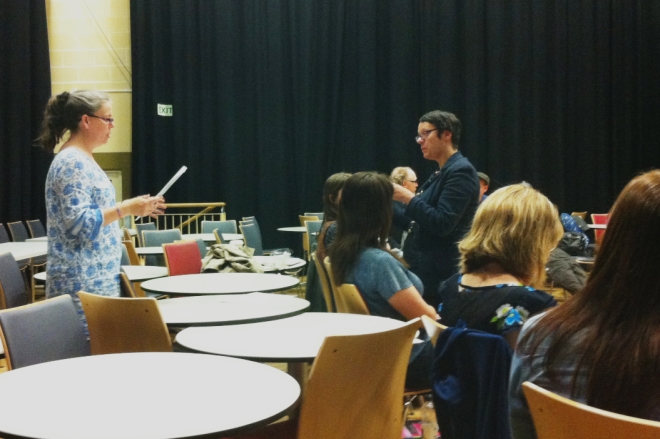 Actress and teacher, Rosie Pelan, instructs writers how to best speak their words in public.

Martin Ridge, from Galway but living in Donegal for many years, is a retired Garda officer. He almost single-handedly took on the might of the Catholic Church when he investigated rumors – that soon became distressing facts – about the horrific rape and sexual abuse of young boys by members of the clergy in northwest Donegal, in and around the towns of Gortahork and Falcarragh. His brilliantly-written book ‘Breaking the Silence’ tells a tragic story of the carnage such abuse created in the lives of the boys, now men, many still living in the area, and the arrogance of the church towards that abuse in refusing to co-operate with investigations or offer appropriate compensation. This particular rural area now has the ignominy of being the worse area for clerical abuse record in all Ireland. For more information on the Ireland Writing Retreat see http://www.irelandwritingretreat.com/