There are some among us (either through ignorance or greed) who consider Donegal unfit for cultural tourism – but a quick glance at what’s happening right now in the area proves them wrong.

As I started writing this, many people – tourism and community leaders, teachers, retired air-force pilots, sociologists, photographers, authors, solicitors, doctors and academics – were gathered at Óstán Loch Altan, Gortahork, in the scenic northwest of the county, talking enthusiastically about developing Ireland’s very own ‘Santiago Columba’ into a successful cultural tourism pilgrimage project that could attract thousands to both western Scotland and Ireland.

Speakers at the conference air their views as to how the proposed pilgrimage trail could be developed.

Organized by The Islands Book Trust, led by John Randall and ably assisted by the ever-helpful Mairi NicChoinnich, in association with Colmcille Éirinn is Alba and supported by Bòrd na Gàidhlig and Foras na Gaeilge, this three-day conference which ended today (Sunday) aims to develop a heritage trail based on the travels and travails of the Celtic mystic, Columba. Such a project could not only inform Irish and foreign visitors about local history, archaeology, folklore and heritage but also create employment and business for hotels, B&Bs, cafes, restaurants, museums and bars alike in the two regions.

“We have a wonderful opportunity to expand our learning and to attract visitors on a significant historical route from south-west Donegal to the Isle of Lewis in north-west Scotland,” said Randall, chairman of the Islands Book Trust.

This united effort is supported by renown authors-cum-academics such as University College Cork’s Máire Herbert (Iona, Kells, and Derry: The History and Hagiography of the Monastic Familia of Columba) and Brian Lacey (Saint Columba: His Life & Legacy). 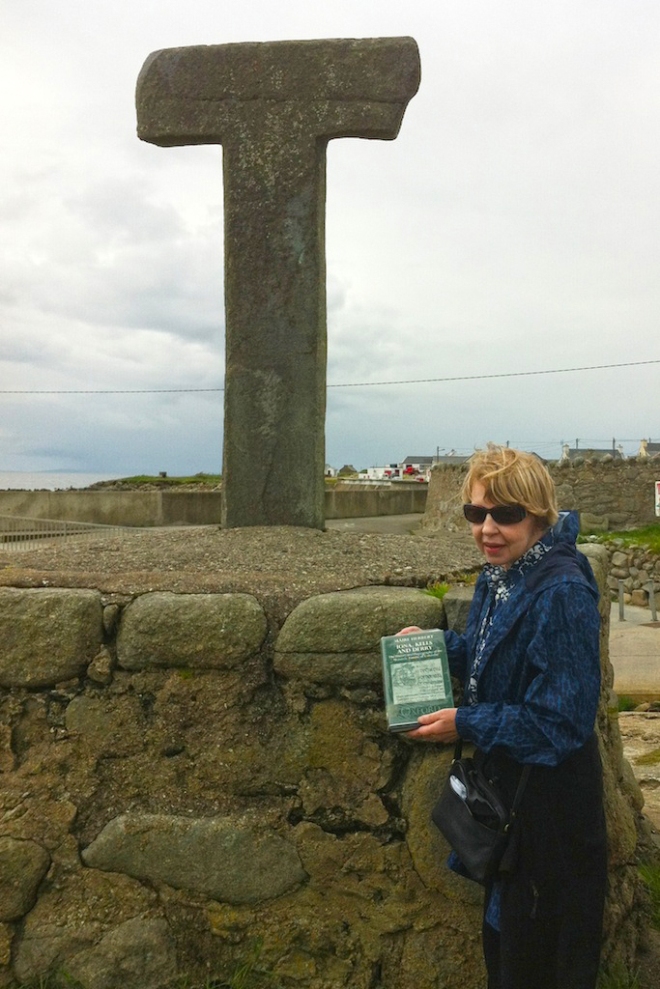 Renown University of Cork researcher and author Máire Herbert beside the old stone cross on Tory Island with her groundbreaking book on the mystic monk Columba (Colmcille).

With additional speakers such as University of Galway’s Mícheál Ó Dónaill, Calum MacGilleain, Tristan ap Rheinallt and Aidan O’Hara from Scotland, Noel O’Gallchoir from Gaoth Dobhair, Noleen Ni Cholla, Moira Ni Ghallchoir, Maolcholaim Scott, Liam O’Cuinneagain and even the King of Tory Island himself, Patsy Dan MacRuaidhri, the conference comprehensively analyzed the tantalizing persona of Columba from the sociological, archaeological, historical, religious and mythological perspectives. And, more importantly, how interest in the fellow can be turned into a dollars and cents/euros and pennies booster for local tourism.

Brian Lacey, medieval historian and author, informs guests at the Sli Cholmcille conference about Pagan and druidic practices in and around Errigal and Muckish mountains.

The only drawback to an otherwise excellent symposium of speakers was the often poor technics, the out-of-focus projection of some otherwise well-researched multi-media presentations.

But the development of Sli Cholmcille is just the tip of the iceberg.

A quick glance at the local newspapers – the Donegal News and the Donegal Democrat – this weekend alone, shows a rich vein of cultural tourism – including the weekly music seisúns and this summer’s ‘Gaelturas’ initiative at Teach Hiudai Beag; the year-long programme of music and dance at Teac Jack and Leo’s Tavern; the ‘Goitse Gaoth Dobhair’ events in Bunbeg this coming weekend, which emerged from the ‘Dearg le Fearg’ language equality campaign, as well as ‘Luinneog Lunasa’ in the same area; the ‘Swell Festival’ on Arranmore; and ‘FestiFál’ and ‘Evil Eye Festival’ in Falcarragh to name but a few. Other local diverse activities with strong potential range from rock-climbing, wind-surfing and kayaking with Rock agus Roam; horse and pony riding at the Dunlewey Trekking Centre and elsewhere; the craft demonstrations at Ionad Cois Locha; and the educational Walking Donegal, the hill, coast and lake hikes with informed guide, Seamus Doohan; as well as specialty walks such as the ‘Tullaghbegley Heritage Walking Weekend.’

And that’s not to mention the many literary tourism opportunities based on the art of creative writing. 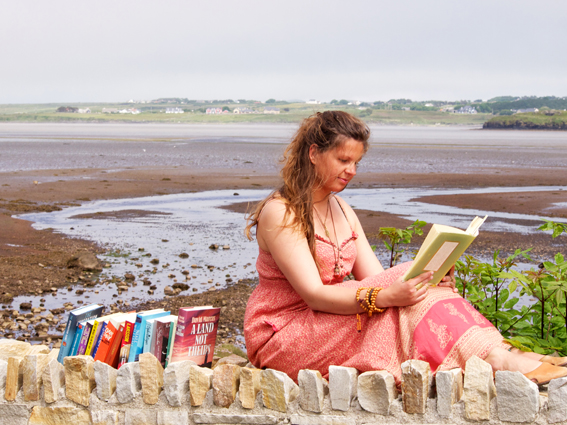 Antonia Leitner from Carinthia in Austria is not shy to show her love of books and learning at Magheroarty Beach.

The idyllic landscapes and seascapes of Donegal have been an inspiration to many best-selling novelists and short story authors who have set their plots within or around the county, in genres ranging from sci-fi to literary fiction and fantasy, as well as plays. These writers include Brian Friel, Edna O’Brien, Sophia Hillan, Kenneth Gregory, Emma Heatherington, Michael Harding and Laurence Donaghy, some of whom will speak at Ireland’s newest writing retreat ‘Forgotten County, Remembered Words’ from June 28th to July 4th in Gaoth Dobhair.

With the national initiative ‘The Wild Atlantic Way’ now well underway and Donegal an integral part of it, there’s only one thing stopping the cultural tourism momentum that’s building up – a continued reluctance by Údarás na Gaeltachta, the primary economic development organisation in the Gaeltacht – to fund the many projects with serious money not just the few pennies it has been doling out until now to stave off a rising tide of protest.

As many people are now saying, this organisation must host regular, open, community meetings and really listen to what local people – the very people they are there to serve – want in terms of more innovative community development; provide much greater transparency in its spending of an estimated 1.2 billion euro in public money, than it has to date; and an end to kow-towing to political parties and their funders (first Fianna Fail and now Fine Gael) which has resulted in far too much money going into the pockets of a rich elite of developers/builders who make easy profits from building simplistic, unneeded, industrial estates.

A new direction is required and a Catholic Church-run sex, drugs and alcohol addiction center in Falcarragh, with no guarantee of decent local jobs – especially as such a centre already exists in Donegal and research indicates this is sufficient for need – is hardly the panacea for high unemployment and emigration from the area. Some say real investment in local cultural tourism means shelving the proposed investment of three million euro by Údarás in the addiction centre and putting those euro millions into local tourism projects, the one sector a beautiful region like Donegal can benefit widely from, now and in the long-term (if that three million euro is spent on the proposed addiction centre, it spells the end for any real investment in anything else – no other board members of Údarás in other Gaeltachts will vote for any further significant monies for Donegal).

In this regard, it is quite sad to see how much Tory Island has fallen below its full potential – far behind many other attractive island retreats dotted around Ireland. The dismissive attitude of relevant funding authorities – and perhaps the disunity and lack of concerted lobbying and effort by local people (full burden cannot rest solely on the shoulders of one man, King Patsy Dan) – has meant its tourism income has suffered greatly, with accompanying lack of promotion (not even a regular newsletter on events or significant signage on the mainland and on the island itself).

“I am tired of trying to persuade Udaras na Gaeltachta officials to properly fund projects here on Tory Island, their ears are deaf, they simply don’t understand,” said King Patsy Dan MacRuaidhri. “The people here deserve such support. Our ancient and colourful history calls out for it.” 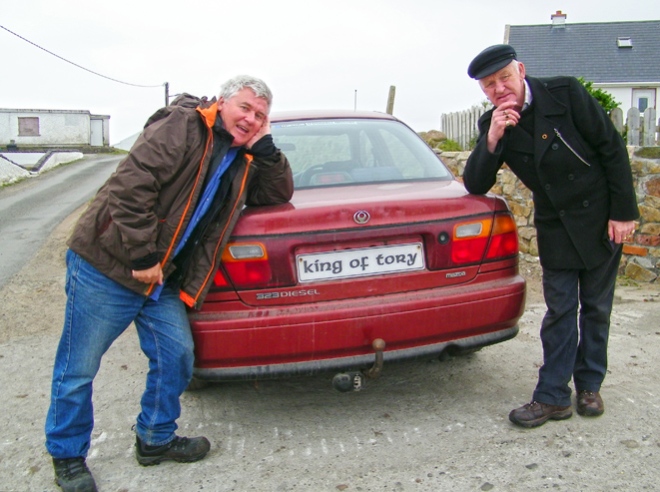 Let’s put an end to the notion that cultural tourism is an unimportant, peripheral activity, the kind of mind-think that Údarás officials are stuck on, and have been for decades. This specialized sector has the potential to provide immense, long-term economic benefits for this hard-hit, hard-pressed part of the county and country, but it requires serious commitment and financial support.

In a future post I will give specific examples from my extensive sojourns in other parts of the world as an international travel writer where cultural tourism has transformed and enlivened a local and often paralyzed economy.

Meanwhile the next post will focus on what precisely various speakers at the conference said about Columba, this larger-than-life monk who seems to defy description, someone about whose background we know very little, either because documents were destroyed by marauding, book-burning Vikings, or were deftly confiscated by church abbots on a precise propaganda campaign.

To read more of Sean’s work, check these sites: 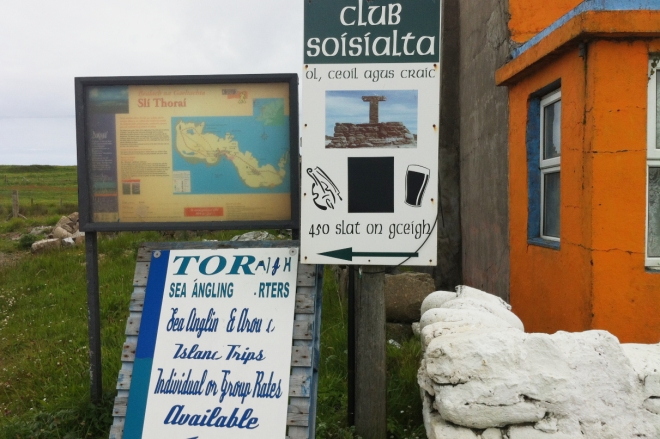 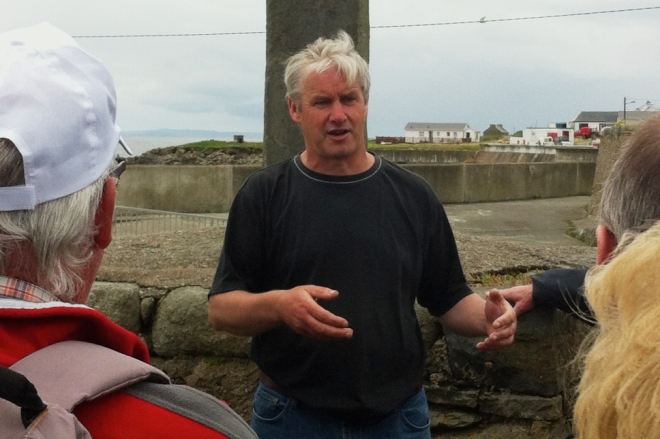 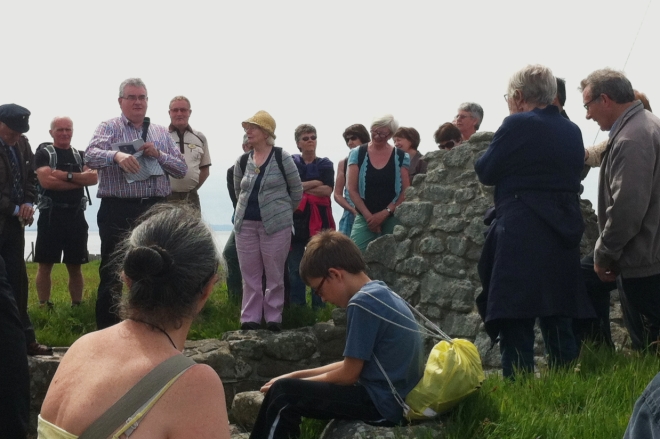 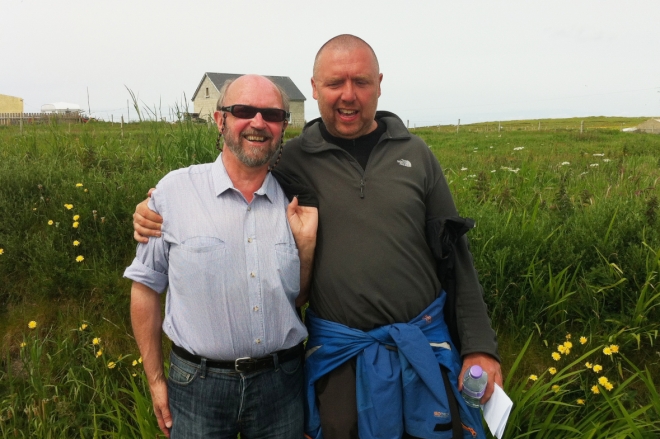