A wheelbarrow and a pair of boots painted proudly in Donegal GAA colors perched atop a house roof in Falcarragh.

And goodness knows how many rusted carcasses of cars suddenly transformed into brightly-colored, eye-catching street decorations.

Sporting success has brought out the best in Donegal creativity – both on and off the field.

With less than seven days to go before ‘the Grande Finale’ at Croke Park, the county is awash with an artistic spirit that Jimmy, Declan and their respective teams have inspired.

Wouldn’t it be wonderful if such genuine outpouring of community solidarity could be harnessed into sustained cultural tourism projects that would provide much needed long-term employment and economic benefits?

If some of the recently erected ‘altars’ to the success of Donegal GAA are anything to go by, there is no shortage of ideas, but funding is sadly missing. Not because the money isn’t there, it is. But because those holding the purse strings don’t have the confidence that proposed projects are anything more than short-term hobbies. Consequently, those with excellent cultural tourism ideas continue to live a hand-to-mouth existence, spending much of their brilliant creativity, not on artistic endeavor, but on scrounging for pennies, with long-term sustainability a mere pipe-dream.

An earlier post cited Udaras’ rejection of funding this year for the excellent ‘Evil Eye’ festival in Falcarragh. Now, a recent report shows a paltry 48,250 euro has been shoe-horned for 17 festivals throughout the county by Failte Ireland. Work out the math. It doesn’t amount to a hill of beans.

Meanwhile, there is a peculiar notion out there that beer will be consumed in considerable quantities in the county if Donegal ride victorious over the Holy Ground this weekend.

The bad news is that beverage choice for such a celebration in the county is among the most limited in the nation. Seemingly, more publicans in Donegal have kowtowed to multinationals such as the British-owned company, Guinness, and Heineken because they offer their products wholesale for as little as 50 cents a pint rather than offer their customers a wider choice of beers and ales to imbibe as is happening in other parts of Ireland.

Attending the Irish Craft Beer and Cider Festival a week ago at the RDS in Dublin, I was delighted to see how many micro-breweries had been launched nationwide – Galway Bay Brewery, The White Hag in Sligo and 9 White Deer in Cork to name but a few. While Ireland is still well behind England and the US in terms of micro-beer choice, mainly due to consumer acquiescence, Donegal is well behind other counties.

Only Kinnegar Brewing and Muckish Mountain Brewery keep Donegal from being bottom of the national micro-brewery league table. The latter is named after nearby Kinnegar Beach  just north of Rathmullan and produces around 4,000 liters per week with funky brands such as Limeburner, Scraggy Bay, Rustbucket, Devil’s Backbone and Yannaroddy. The latter, based in Creeslough, produces Miner’s Red Ale made with dark crystal malt.

It is the same narrative when it comes to cider. Check any pub in Donegal and the likelihood is the label says ‘Bulmers.’ For the record, most of what goes into this particular drink is concentrate, usually brought in from Poland by the truckload. Every day they’re lined up at the plant waiting to unload. ‘Tree slurry,’ as as one cider aficionado quipped less than affectionately. In contrast, Irish apples represent a tiny percentage, less than five percent of content, insiders say. That’s why information on bottles and cans is so vague and limited. Yet, there’s choice aplenty – if we push publicans to provide it – with scores of other Irish cider producers that use freshly-squeezed apples, such as ‘Tempted? outside Lisburn, the ‘Armagh Cider Company’ and ‘Craigies Irish Cider’ in Wicklow. But most Donegal pubs ignore them – for the sake of greater profit.

Good news is that a crop with a long tradition in Donegal but one long forgotten is again being planted – something that gives a faint glimmer of hope to real beer drinkers. Hops are now growing in Conwal outside Letterkenny near the site of an old monastic settlement, whose caped inhabitants once prided themselves on their beer-making skills (those monks had their priorities right).

So when you rush to the bar this Sunday evening celebrating the latest Ryan McHugh goal, forgo the usual sulphite-laden, chemical-ridden liquids and ask for a local brew. Then watch closely the bemused expression on the barman’s face (as per below). 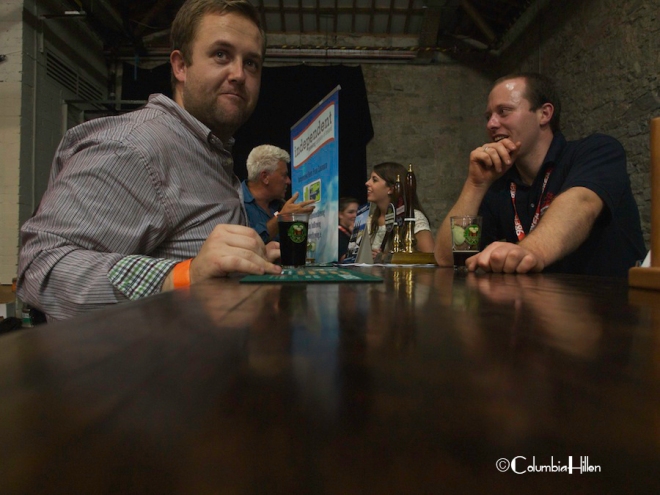