Though his name has become well known down through the centuries, nobody seems to know much about him – one of the reasons he has become a figure of legend.

But efforts are now underway to unmask the mysterious Irish monk known as Colmcille and in so doing create a special pilgrimage aka the Camino of Santiago de Compostela that could provide a much needed boost to the ailing tourism sector amid the rugged beauty of northwest Ireland.

To this end, a launch event will take place this Friday at 12.30 in An Crann Og in Derrybeg, west Donegal, where all will be revealed. 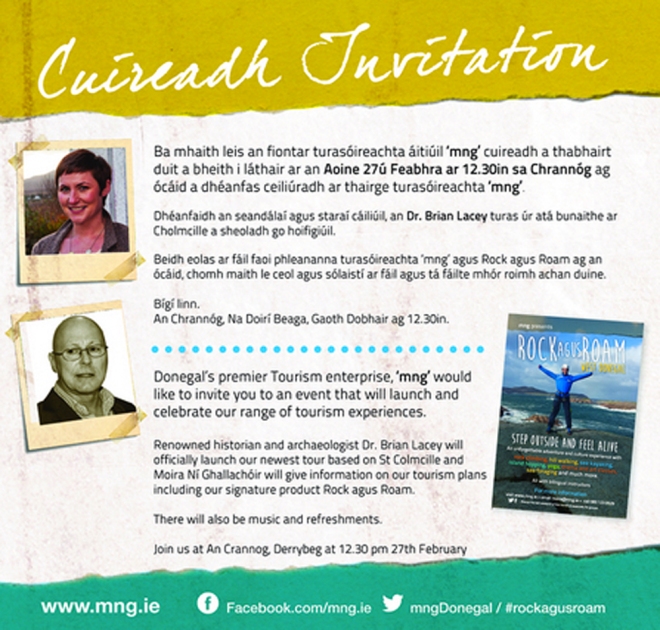 Much of the information about the enigmatic fellow was written many years after his death in the middle of the 6th century and as such, as often happens when attempts are made to enhance an individual’s saintly credentials, is either embellished or simply inaccurate. But the result has been even greater intrigue and heightened interest in the fellow – what he did and what he stood for.

One absorbing element is that his name is linked to the ‘illegal’ copying of a secret manuscript – with many observers saying it may have been the first-ever case of copyright infringement. But nobody is certain whether it really happened as described or, if it did, what the sacred document was, belonging to Finian, the monk’s former teacher, that Colmcille felt such a great need to copy, and why.

Following the incident, Diarmuid, High King of Tara, is supposed to have handed down an edict, “To every cow her calf, and to every book its transcript. And therefore to Finian of Moville belongeth the book.” Not surprisingly, this decision was not to the liking of certain interested parties, including the revered monk himself. Records indicate fighting erupted over this bizarre case of intellectual theft with Colmcille facing the High King at the ‘Battle of the Book’ on the slopes of Benbulben in Sligo.

Some also say this – a bloody battle that left several thousand dead – was the reason Colmcille left Ireland for Scotland voluntarily and with great remorse, to establish his own settlement on the island of Iona. Others say he was ordered, or ‘advised,’ to get out of town fast or have assassins forever chasing his tail. After all, a spear to the head or sword to the gut were pretty strong persuaders in the dark days when rival monks were also fighters well trained in the art of swift and agonizing chop-chop.

Colmcille’s story by most accounts began in Gartan, Donegal, where he was born into the northern branch of the O’Neill Clann around 521. His mother, Eithne, was believed to be a princess from Leinster, and his father, Fedelmidh, a prince of Tír Conaill and the great grandson of Niall of the Nine Hostages, the pagan king who brought Patrick, he of shamrock fame, as a slave to Ireland. Christened Criomhthann (meaning ‘fox’), Colmcille certainly lived up to his name, jumping in among the chickens as he did and causing such a furor.

Scholar, warrior, mischief-maker, prince, diplomat – Colmcille seems to have been a man of many parts. If you want to learn more about him, be at Crannog, this Friday where Brian Lacey, renown historian, author and expert in the era, and Moira Ní Ghallachóir, founder of outdoors tourism group, mng.ie which organises ‘Rock agus Roam,’ will speak at the launch of an innovative tourism venture entitled ‘Connecting Colmcille.’

In addition, a special exhibition entitled ‘Amra Cholium Chille’ – a modern translation of a poem composed after the monk’s death with paintings by Brian Ferran and caligraphy by Donald Murray – will be opened at An Gailearai in Aislann Ghaoth Dobhair at 8pm this Friday evening. The event is free and open to the public with wine and refreshments served.

For further reading, see the works of University College Cork’s Máire Herbert (Iona, Kells, and Derry: The History and Hagiography of the Monastic Familia of Columba) and Brian Lacey (Saint Columba: His Life & Legacy).