It’s a wonder what focused, positive, down-to-earth community spirit can achieve especially in face of institutional apathy and paralysis – parkrun in Falcarragh in rural west Donegal being a prime example.

For years, the charming, bucolic grounds around the historic Ballyconnell Estate near the town center were left to wither, unused, disused, and pretty much forgotten by most, except for the odd few curious walkers. Talk of a Catholic church-run addiction center died a slow death, as did a thousand and one other ideas.

Then in stepped a group of local volunteers, with a fiery passion, an innovative idea and an unstoppable ‘can-do’ attitude.

Last Saturday morning under Spring sunshine (yes, it did happen in Donegal), I witnessed first-hand what such admirable leaders can achieve when they unite in the right place at the right time: an overwhelming wave of heartfelt enthusiasm from people of all ages, women, men and children, from eight months to eighty years old, all enjoying a self-supporting, self-perpetuating, united community get-together – with individual mental and physical health being the ultimate achievement.

In many ways, the strong-willed volunteers who kick-started the parkrun project – the first in Donegal – echoed the words of that Hawaii-born, basketball-playing, first African-American President, Barack Obama, when he uttered those immortal words outside Trinity College Dublin.

In many ways, perhaps those same volunteers were simply on the same wavelength as Obama when he said – “Change will not come if we wait for some other person, or some other time. We are the ones we’ve been waiting for. We are the change that we seek.”

As a result, this happened. And I was proud to be among the very people who made it happen…

Yours Truly (second from left) with parkrun Falcarragh volunteers and a Derry-based veteran of parkruns dressed in black, with more than 170 runs under his belt.

They’ve come in their thousands – chimney-sweeps, farmers, van-drivers, landscape gardeners, shopkeepers, bartenders and students; top-notch athletes racing through five kilometres in under 20 minutes; young mothers pushing prams, septuagenarian grandmothers and grandfathers – all encouraging each other in the interests of better health.

Such has been the overwhelming enthusiasm for Donegal’s first-ever ‘parkrun’ that organisers in Falcarragh are now discussing how their year-old, volunteer-based community effort – which transformed a few acres of unused land tucked between the second and third holes of the local golf club into a scenic forest running circuit that has attracted more users than anyone anticipated – can be further improved and expanded.

Men and women of all ages take to the pathways – smilingly.

And they’re expecting a strong turnout this Saturday morning at 9.30, a holiday weekend, while preparing for a special ‘Darkness Into Light’ charity event on Saturday, May 6 on behalf of Pieta House, a suicide prevention service.

Paul McFadden, one of the volunteers, said the Falcarragh parkrun project began as a modest ‘Men On The Move’ event supported by Donegal Sports Partnership “where a few local men got together for a short walk and a cup of tea.” The group then contacted Údarás na Gaeltachta, caretakers of the grounds of Ballyconnell Estate, and raised funds through activities such as pub quizzes, as well as a ‘big breakfast’ sponsorship by McClafferty’s Eurospar in Gortahork for 120 runners, to buy construction materials and rent equipment. 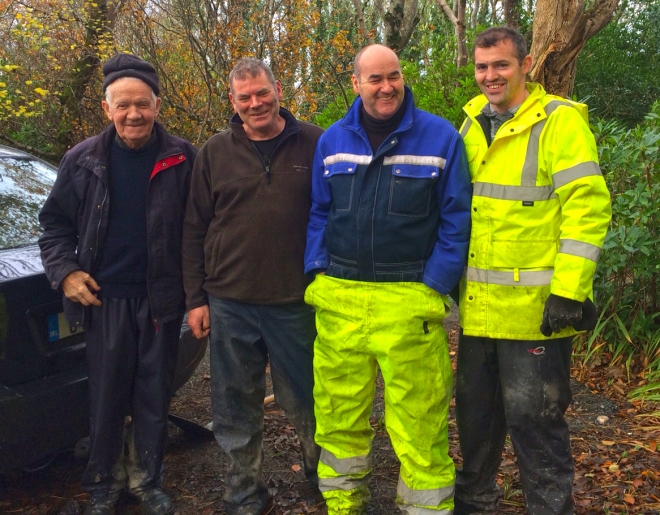 Hard-working volunteers who made parkrun Falcarragh a reality.

Examples of individual generosity included that of Damian O’Donnell who donated 500 pounds sterling to the community cause.

Another volunteer, Tom Feeney, said generous local people also sponsored summer seats. McFadden, Feeney and colleagues met several times with Údarás officials and now community group, Falcarragh Parish Development, has signed a license to operate the parkrun grounds. Such has been the project’s success, RTE recently sent out a team to produce an ‘Operation Transformation’ programme and local doctors are prescribing participation as a ‘green’ remedy for some ailments. There are now hundreds of parkruns worldwide and two more in Donegal – in Letterkenny and Dungloe.

Hugh McGarvey, 35 from Bun na Leaca, a tour bus driver with John McGinley Coaches, has completed the circuit six or seven times in preparation for the Wild Atlantic Adventure Race (WAAR) in Donegal next month comprising a combination of sports including running, cycling and kayaking. “Parkrun Falcarragh is a very well organized event, one that I enjoy very much. It is even more impressive when you consider it’s an all-voluntary effort,” he said. Displaying strong family support, Hugh’s partner, Siobhain, has also participated, with their 14-month old infant, Maggie Mae.

Packie Doohan, aged 80, from Drumnatinney, just outside Falcarragh, husband of Creeslough woman, Veronica, with 16 grandchildren and retired after 43 years as a linesman for the ESB, has run the five-kilometre circuit 66 times already. “I started at the very beginning. It’s great exercise. It gets you out of bed on a Saturday morning. And you meet lots of people. And I’m among some very pretty ladies. What could be better?”

Also, preparing for WAAR, Falcarragh man, Eddie Curran, 55, said, “The Park Run is one of the most positive things to happen in this wee community. I see people who were walking the route last year, now running it, such has been the effect on everyone’s health and fitness.”

Hand of triumph. One of many happy finishers.

Support for the Falcarragh project has risen dramatically with many local social workers, teachers and medical personnel becoming involved. Carers at the nearby St. Martin’s House bring people with disabilities to the circuit for leisurely outings as does the local branch of Solas, a HSE project designed to engage people involved with the mental health system in outdoor activities.

St. Finian’s School use the route and have conducted a clean-up of the entire area while raising money for costs involved in its upkeep. Pobalscoil Chloich Cheannfhaola also regularly use it for training purposes. “Parkrun was developed by the people of the community for the people of the community and like the ‘Wild Atlantic Way’ it works because it’s for everyone and it’s free,” said McFadden. “If there is praise to be given it should be to the people who walk, run and turn up every Saturday morning, from Mary who makes the tea to Maureen who processes the results.”

Turn out this Saturday morning at 9.30 and make Falcarragh proud!

Having arrived in picturesque west Donegal – Bun na Leaca to be precise – over six years ago and recognizing it for the artists’ haven that it is, my wife, Columbia, and I thought about establishing a creative writers’ retreat.
After all, surely such a pristine and bucolic landscape could inspire great prose.

Not that such an idea hadn’t been done before.  Poet partners, Janice Fitzpatrick Simmons and her late departed husband, James, had done so many years previous, setting up a ‘Poet’s House’ in a refurbished cottage at Clonbarra, outside Falcarragh.

Then funding was more generous and tens of thousands of euro annually wasn’t much of a problem for Udaras na Gaeltachta, the Arts Council, Donegal County Council, LEADER, and other sources.
Times have changed, however, and the public funding pump is dripping slowly, a mere trickle at best. Seanie FitzPatrick and Co. and Fianna Fail made sure of that. 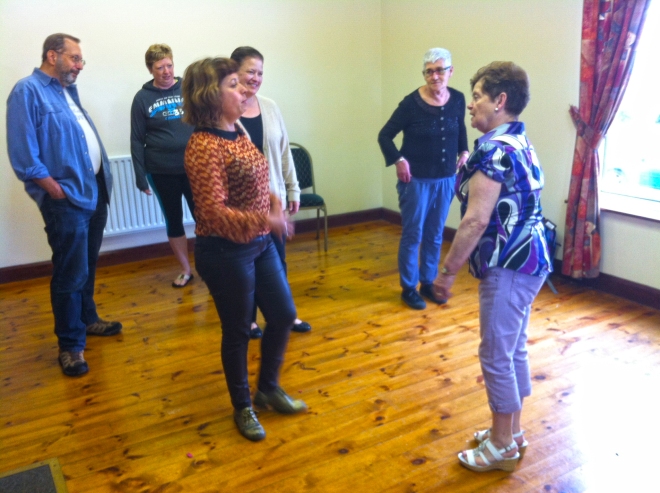 County Librarian and Divisional Manager of Cultural Services, Eileen Burgess, a keen supporter of our idea, issued warnings: “It’s a wonderful project but there’s simply no money in the kitty. You’d pretty much be on your own.”

But you know how it is – an intriguing idea comes along, sticks to you like furze in a meadow and simply won’t fall away no matter how hard you try.
So, even though there are more than one hundred creative writing conferences and book festivals throughout Ireland – many in the much-publicized, tourist-centric counties of Dublin, Cork, Galway and Kerry – we took the plunge.
After all, isn’t Donegal the prettiest of them all? 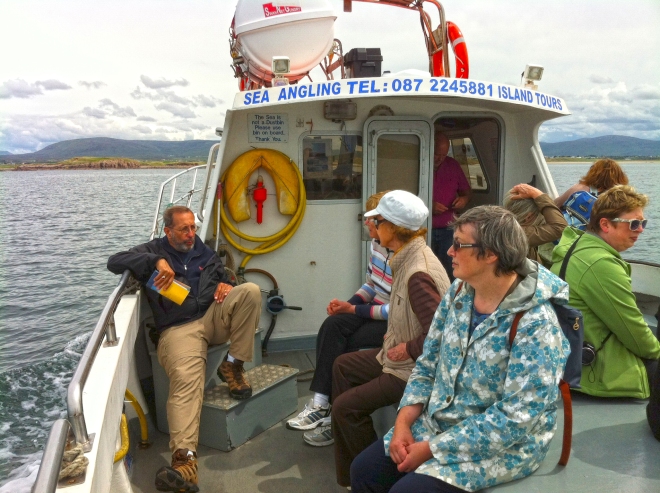 Of course, wisdom told us to delay until better economic times were upon us. But passion drove us forward, screaming, ‘tempus fugit.’ We swayed for a while between the two.

We’re going into our third year now and have managed to attract participants from far off fields, many of whom had never been to Ireland before never mind the back-roads of the Donegal Gaeltacht – Wyoming, Sydney, Utah, Perth, Stoke-on-Trent, New Jersey to name but a few.
Not bad for a project without public funding of any kind.

Imagine where it could go with a bit of financial support – but perhaps only if it’s located in one of the aforementioned counties.

As for this year, international stars of the week-long retreat included John DeDakis, triple book author and former senior editor at CNN for 25 years who flew directly from Washington to be at Teac Jack’s, the retreat location; Anthony Quinn, experienced author of crime fiction with a crafty literary twist; and Mark Gregory, a much-heralded forensic editor (the person who reads book manuscripts minutely word by word, syllable by syllable).

But committed locals also loaned their weight enthusiastically to the endeavor – actor and drama group director, Murray Learmont, guided participants on improving their public reading skills; singer-songwriter-guitarist, Ian Smith granted insights into the challenging task of lyric writing; Rose Sweeney taught participants their ‘sevens’ in preparation for a ceilidhe in the backroom of the popular Glassagh venue; Pól Ó Muireasáin gave an enlightening tour of Gola Island; and Seamus Doohan led participants on a Celtic legend coastal walk – all of which was grist to the mill for writers’ creativity. 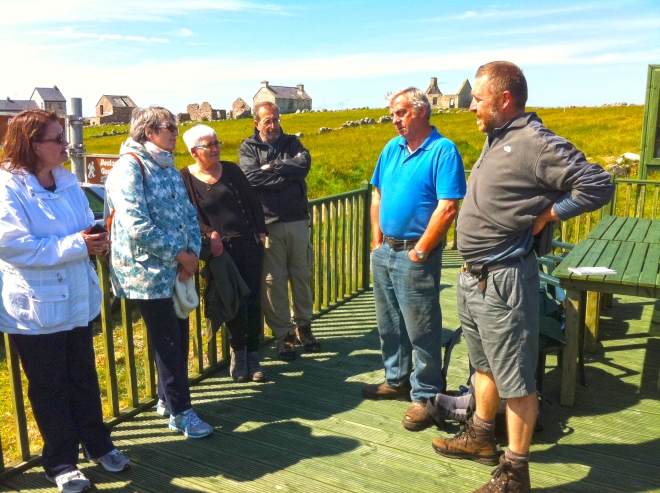 Eddie, the uncrowned King of Gola Island (in blue) with walking guide, Pol O’Muiresean, (r) talk about life on the west Donegal island many years ago.

The ‘Donegal News’ considered this year’s ‘Ireland Writing Retreat,’ which ended last week, worthy of an article in today’s edition.