Nothing is worse in life than waiting for death.

Especially if that death is an excruciatingly slow and painful one.

That’s why it was so heart-wrenching to watch a pod of 13 beautiful adult long-finned male and female pilot whales and their children suffocate slowly – over five horrific days – at Ballyness beach near Falcarragh this week. 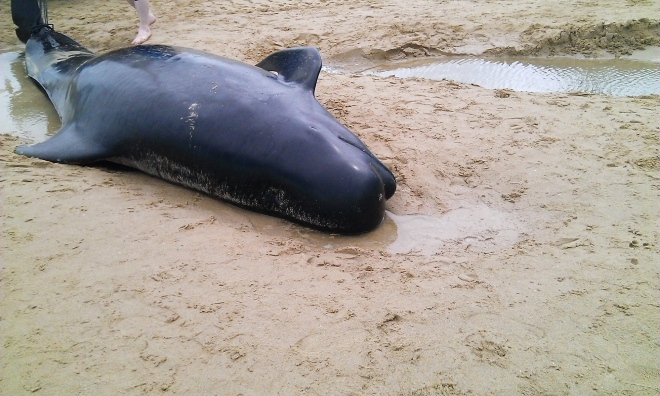 One of the stranded pilot whales, a highly-intelligent member of the dolphin family, lies struggling for breath on Ballyness Beach, Falcarragh, west Donegal.

Heart-wrenching because there must be – and is – another, more humane, way to deal, with such a tragic situation. And the Irish authorities, in their usual bumbling, bureaucratic manner, haven’t cottoned on to it.

In other countries, including those in Europe as well as Australia and New Zealand, people are encouraged to come with buckets of water and towels when whales become stranded ashore, to help them survive, to prevent their sensitive skin from being burned up, until efforts can be made to return them to the waters from which they came. At Ballyness, there were reports of the authorities actually turning people back from doing so, including a young woman who was bringing glasses of saltwater to pour over the eye of a dying whale. 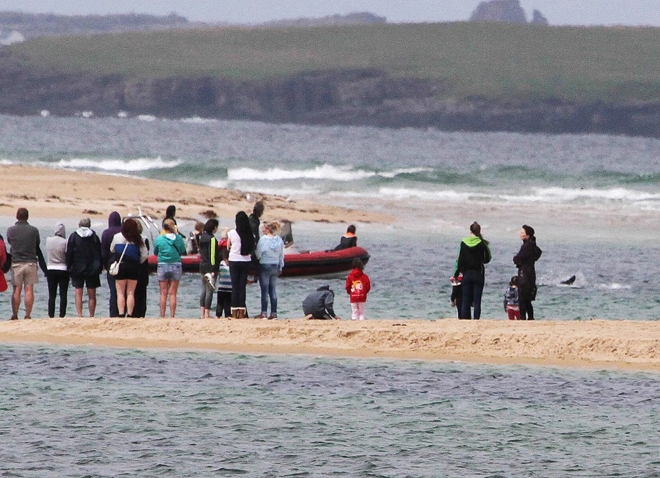 Local people look on helpless as a pod of pilot whales struggle to re-enter deep waters. Photo by Joe Boland

How ironic. After all, it is usually us, humans, that cause such tragic situations in the first place. Pilot whales, 16 to 20 feet in length and highly-intelligent members of the dolphin family, usually live offshore, following and feeding at a depth of between 2,000 and 10,000 feet along the corridor of the Continental Shelf, which lies around 50 miles off Tory Island, according to local environmentalist, Gareth Doherty. If you see them near shore something is badly wrong. Through the dumping of toxic waste in the ocean and from tolerating – often unauthorized – military submarine activity, both of which interfere with marine animals’ natural sonar systems, we force vulnerable whales, as well as dolphin and other species, into shallow water where they become trapped and struggle for breath. Think of yourself drowning – very, very slowly. Think of a plastic bag being pulled tight over your face and you trying to breathe, realizing the next breath might be your last. That gives you some idea of the torture our close cousin, the whales – mammals just like us – went through this week at Ballyness beach, west Donegal.

That’s tragedy in itself. Worse is that what happened this week could have been prevented. Or at least dealt with in a less cruel fashion. 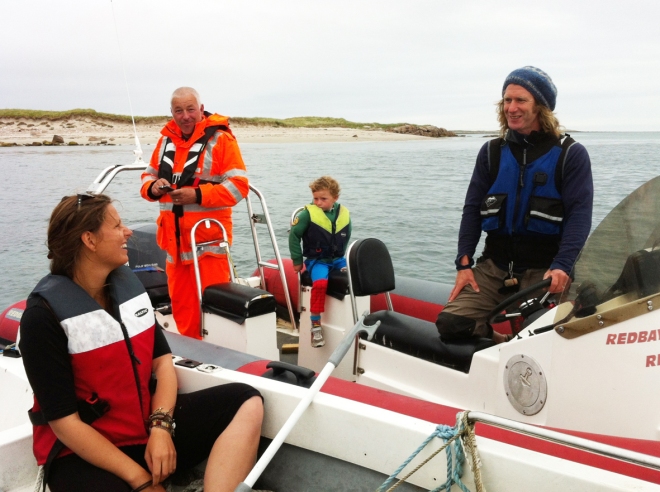 Coastguard Joe Curran (in orange) and Gareth Doherty talk to Austrian Antonia Leitner about whale activity in the area.

Unlike many countries, Ireland doesn’t even have a formal, official SOP (Standard Operating Procedure) in place so that the various organisations – Gardai, health authorities, Dongal County Council, National Parks and Wildlife, the Irish Whale and Dolphin Group – know exactly what to do in a difficult situation like the one this week at Ballyness. Consequently, delays occur, and delays are crucial in such situations, literally the difference between life and death. Some authorities were telling people not to go near the whales, others were letting them do so. When asked about this, the inevitable response from wildlife and parks officials – most of which have a passion for animal safety – was that marine animals are protected in the wild in Ireland. However, stranded whales by the nature of the situation are obviously not ‘in the wild.’ Their response to this: ‘rules are rules, we have to follow protocol.’

In some countries, a task force has been set up and vets specially trained to deal with such large mammals in such distress, even to administer opiates as a mean of ‘mercy killing’ to put the unfortunate animals out of their misery. Not in Ireland, even though such a task force has been ‘under discussion’ for quite some time.

Efforts underway by local environmentalists to try to save some of the struggling pilot whales. Photo by Joe Boland

Remember, the stranding and deaths of the 13 whales at Ballyness is not the only example. There have been 13 such whale strandings over the last year in Donegal. Not to mention the 32 whales on Rutland Island two years ago, all left to die, then cut up and transported to Cavan where they were burned in an incinerator. Have you any idea how much that whole operation cost? Tens of thousands of euro in hard-earned public money wasted by Donegal county council – money for the hire of JCB diggers and their drivers simply to be on stand-by – just waiting for the whales to die; costly overtime for Gardai and personnel of the National Parks and Wildlife – just waiting for the whales to die; transport trucks; butchers for the cut-up of the bodies; fees for incineration. That money could have been better used for proper equipment to try to push the whales back into the water – some would survive, others might not, but we’ve got to try. That money could have been used to purchase the opiates; for training of vets; for sending blubber samples to laboratories – as they do in many other countries – to find out what is causing the strandings in the first place.

It’s no wonder we Irish are the laughing stock of Europe, and beyond. It’s long past time Irish authorities faced up to their responsibilities in the proper manner. Whether it’s caring for our precious wildlife; dealing with crooked bankers; or organizing a bloody country-and-western music concert, we just seem to cock things up. 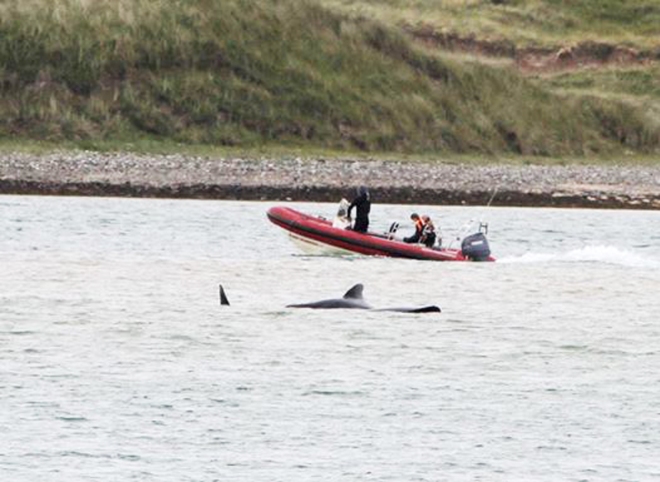 Gareth Doherty, environmentalist and wildlife enthusiast with Selkie Sailing, Derrybeg, and colleagues, observe the efforts of pilot whales as they try to make their way back out to sea. Photo by Joe Boland

And we will continue to cock things up – until Irish people wake up, realize they’re being made a fool of and use their voices and their feet to put an end to it.

Instead of letting children bounce up and down on the backs of dying whales, as some parents did at Ballyness this week, or carving their names on their backs, what about people setting up a petition table at Falcarragh crossroads (and/or one online, I can help someone set this up)? Is there a better time to start than today, Friday, market day, and for the next few weeks, calling for changes in regulations to prevent toxic dumping, restrict military submarine activity and allow for more humane care of marine animals dying around our coast?

Search-and-rescue missions will continue this weekend as further sightings of beached whales and other species reach local coastguard stations. Bunbeg Coastguard Joe Curran and Gareth Doherty, with Selkie Sailing in Derrybeg, spent hours sweeping in and around the inlets of Gola, Owey, Inis Oirthir and Inis Meain islands seeking evidence of whales in difficulty to save them.

“They are wonderful species and deserve whatever help we can provide, like us, they’re of Nature,” said Curran, as he sped from fishing boats to sailing crafts enquiring whether anyone had seen unusual activity (see photo above).

Added Doherty, who managed with others, to push two of the dying whales back into the water for safety, “This tragedy highlights the need for all of us to be extra careful in how we treat the environment around us, whether that be land or sea. Some of the workings of Mother Nature are best left alone, but we can make our environment safer. Keeping our water, our beaches, clean of toxin poisons is key.”

One thought on “Wailing for the death of majestic whales”