How can small boxes of air that fit neatly between one’s hands create the haunting rhythm of a heartbeat, the roar of an angry sea and the chanting of cloistered monks at prayer?

Ask the talented, five-member ‘Irish Concertina Ensemble’ who captivated a packed audience earlier this week at Teach Hiudái Beag, a popular traditional music venue on the main street of Bunbeg in the Donegal Gaeltacht (a region that features prominently in new suspense novel ‘Pretty Ugly’ (Easons, Gallaghers/Matt Bonners Bunbeg, Amazon) and where the Irish Writing Retreat takes place every year).

Such wondrous music left me bemused about how such a rich diversity of melodies can emerge from such a tiny bellows-buttons-reed instrument. The ensemble, with members from different Irish counties, was one of many performances at this week’s ongoing annual ‘Scoil Gheimhridh’ (Winter School) in Gaoth Dobhair (the festival continues right through Sunday, so buy your show tickets now).

Composed of Tim Collins, Padraig Rynne, Micheal O’Raghallaigh, Caitlin Nic Gabhann and Edel Fox – the musicians brought this popular, cozy pub to a hushed and appreciative silence. So exhilarated were affable pub manger and owner, also himself a fine musician, Hugh Gallagher, my wife, Columbia, myself and others, we gave them a hearty and well-deserved standing ovation. 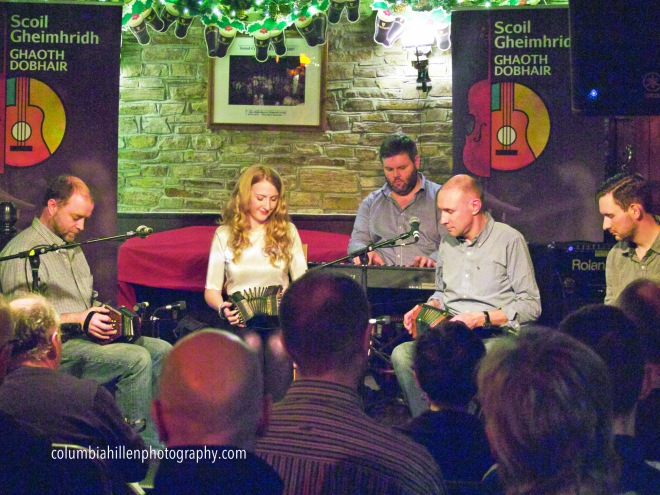 Drawing on a wealth of melodies, some old, some new, some composed for other instruments such as the fiddle, flute and uilleann pipe, the group displayed the surprising and immense versatility of the concertina.

Not only were there versions of tunes by such iconic instrumentalists as Turlough O’Carolan, (1670–1738), a blind Irish harper and composer, but also their own compositions. Highlights among the latter were a series of mellifluous waltzes in honor of Kathy, a friend and admired social activist who died from cancer, and also a dreamy melody inspired by watching the sunrise with Oisin, the young child of one of the group members.

The opening night of the festival was a veritable cabaret of myriad talents at Ionad Cois Locha in memory of well-respected community and media leader, Seamus Mac Géidigh, broadcaster and manager of RTÉ Raidió na Gaeltachta‘s northwest service in Donegal, who recently passed away.

Such is the interest in preserving local Irish heritage, fiddle player and teacher Róisín McGrory who is also co-founder of the Inishowen Traditional Music Project established in 1999 to preserve the music of the region, also performed at the festival.

Another highlight of this week’s festival and music school so far has been the double-bill of Carlow-based brothers Diarmuid and Brian Mac Gloinn who perform as ‘Ye Vagabonds’ and star fiddle-player and ‘Hobbit-lookalike’ Frankie Gavin, who played alongside bouzouki-mandolin player, Brendan O’Regan. The former, resembling young, bearded troubadours, moved effortlessly from ballad to toe-tapping melodies, from the ‘Lowlands of Holland,’ a soft air about a man lost at sea, which they learned from Donegal-native Paddy Tunney, the same county their mother hails from – Arranmore Island – to a lively finale that included ‘The Lark In The Morning.’ They sang songs in both English and Irish.

While he strikes a remarkable resemblance to one of my heroes, the hobbit, Bilbo Baggins, the affable Gavin’s blinding bursts of speed reminded me more of ‘The Fiddler of Dooney,’ the character in the W.B. Yeats poem of the same name whose fiddle playing ‘made folks dance like a wave of the sea.’

To say Gavin’s bow tripped lightly over the strings would be a severe understatement. Skipping, dancing, somersaulting even, would be much more appropriate descriptions – from hornpipes and reels to jigs and highlands; from Donegal composition, ‘Strike the Gay Harp’ to ‘The Old Grey Goose;’ from tunes by well-known Irish musical ambassadors such as fiddler Tommy Peoples and music collector and uilleann pipe player, Séamus Ennis; to others learned from fellow musician, Dermot Byrne; and still others he performed previously with French violinist Stéphane Grappelli in a ‘Jigs and Jazz’ show.

Gavin’s ludicrously fast fiddle-playing may have seemed eye-to brain-to-fingers neurologically impossible but when he picked up the flute he really put the emotional brakes on his packed audience at Teac Jack in Glassagh (which also features prominently in ‘Pretty Ugly‘), leaving them glassy-eyed with his version of the classic slow air, ‘Boolavogue,’ about Father John Murphy and the Wexford uprising during the Irish rebellion of 1798.

Not only, but the founder of the well-known group, DeDannan, is also a natural raconteur and effortlessly entertained his listeners with an assortment of jokes, ranging from lion-tamers to one-clawed lobsters. Alongside him, ‘Speedy Fingers’ O’Regan displayed his musical virtuosity with a simply brilliant solo of his own competition on mandolin.

They include Conor Byrne, accomplished flute player who was mentored by west Belfast musician Frankie Kennedy (who tragically died from cancer at a young age and for whom the festival was originally named after); Cathal Ó Gallchóir, who is also manager of local community center, An Crannog in nearby Derrybeg, where varied activities ranging from yoga to Irish language and music classes take place; their excellent, friendly support team; and special guests such as fiddle player, music teacher and journalist, Martin McGinley, who opened the festival this year and who conducted a most interesting, light-hearted and insightful  afternoon interview with Gavin at PobalScoil Gaoth Dobhair (more on that, including naked Danish concert-goers and sessions with Jagger and Co. of The Rolling Stones in an enlarged festival review on World Itineraries later this weekend). 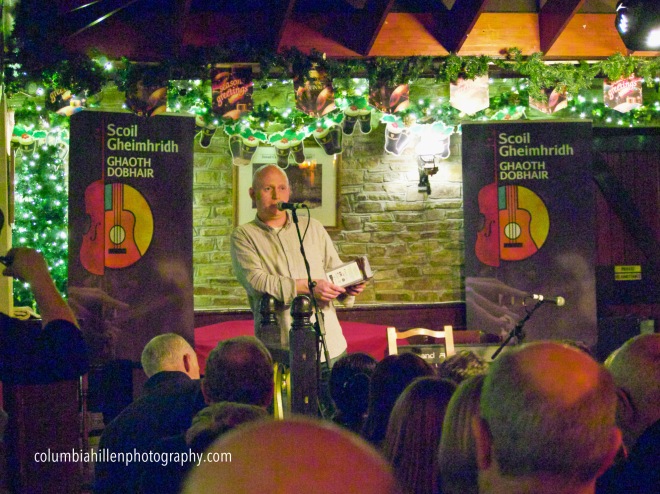 ‘Scoil Gheimridh’ has now rightly become a prominent feature of national Irish cultural life. Students and teachers, men and women, schoolchildren and retirees, both national and international, lovers of instruments ranging from the bodhrán, an Irish hand drum, to fiddle, flute, uilleann pipes, accordion, concertina and even traditional sean-nós singing and dancing, gather every year in this beautiful north-western region known as the ‘Forgotten County’ to attend classes taught by leading musicians and to enjoy the many concerts and seisún.

Here, in this most northerly region of Ireland, interest and pride in the native Irish language, Gaeilge, and the rich cultural heritage of their forebearers remains impressively strong, especially in the face of the fickleness and superficiality of modern-day life.

Sponsors of the annual winter school include The Arts Council of Ireland.