Artistic and organizational daring-do recently transported the pretty coastal town of Ramelton (Ráth Mealtain in Irish means ‘Fort of Mealtain’) in east Donegal, Ireland back to the charming musical nostalgia of pre-World War Two, reminiscent of ‘Midnight in Paris,’ the recent movie directed by Woody Allen. 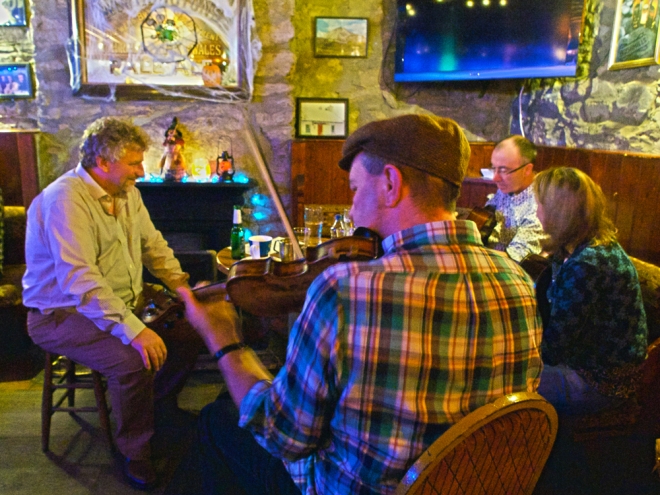 Billed as ‘Django sur Lennon,’ the inaugural weekend festival focused on a genre of music known as either gypsy jazz or manouche, with one of the foremost pioneers being Jean ‘Django’ Reinhardt, a Belgian-born French guitarist and composer of Romani ethnicity.

With international musicians from countries such as Italy, Spain, Holland and Slovakia playing, the tiny Irish town alongside the River Lennon became a cosmopolitan hub of melodies with a definite positive vibe, both in formal concert-hall settings and informally in many of the town’s pubs and cafes, and even in a ‘mystery venue’ – a 17th century mansion.

Kicking off the festival was a quartet in the Town Hall, complete with an elegant, colorful stage canvas backdrop of chandeliers, bay window and ornate Doric pillars and a choice of either table-side or cinema-style seating.

Skilled guitarist, Romane from Paris, was joined by Dublin-based, pony-tailed José Anselmo on double bass, Rudo Bado on violin and Belfast-based Nicolas Deschatrettes on rhythm guitar. They played classics such as Reindhart’s ‘Swing 48’ and Romane’s original creations such as an enchanting tune he composed for his wife and first practiced with the violinist a mere hour before the show. Among their other musical renditions during the unbroken 90-minute set were ‘Pour Parler’ and ‘After You’ve Gone.’ 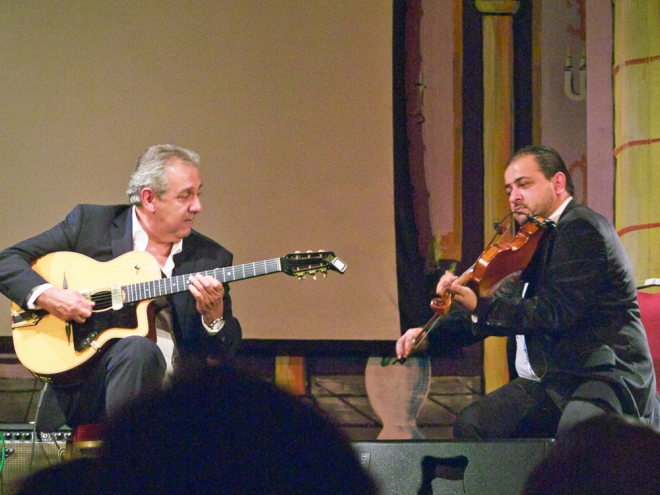 It was delightful to listen to Romane’s guitar and Rudo’s violin intimately, affectionately, effortlessly wrapping around each other, flirting like old familiar lovers knowing the simple caresses that turned each other on, a pure musical joy to listen to.

A second enjoyable quartet at the town later, was led by Amsterdam-born singer-guitarist Irene Ypenburg. Their diverse musical offering included a tune which originated out of a Norwegian folk song, then was re-interpreted by a Greek composer before Django transformed it manouche-style. Another tune, ‘Django’s Tiger,’ was a playful, flirty tune, almost naughty in style if lyrics had been put to it. Ypenburg, who is also a Reiki master and a talented artist, also sang a gypsy ballad penned by Schnuckenack Reinhardt, a relative of Django, about what defines ‘richness’ – material well-being or simple contentment.

Other tunes included the lively ‘My Brother,’ the song ‘Chavo’ meaning ‘Man’ or ‘Lad’ and the well- known Yiddish song ‘ Bei Mir Bistu Shein,’ more popularly known as ‘My Dear Mr. Shane’ a former hit by the Andrews Sisters, as well as ‘The Sheik of Araby’ and the romantic classic ‘Autumn Leaves,’ sung by Irene in both French and in English.

Later during the festival at Ramelton Town Hall, another concert featured three guitarists, the Dario Napoli Trio, who opened with the tune ‘Within,’ composed by the Italian-born Napoli, with the composer-guitarist explaining that his genre of music was not “pure Django but a modern fusion.” If Olympic gold medals were doled out for the fastest fingers running up and down guitar frets, Napoli would be Usain Bolt. Immensely talented, he and his two supporting musicians shifted seamlessly from one tune to another, fast, sometimes furious, producing intricate three-way sets of string harmony, never, ever harsh.

Master of his instrument, it seemed at times as if the guitar was a natural physical extension of Napoli’s arms. His rendition of his composition ‘My Favorite Spot,’ created last year while on a music coaching camp in Tuscany, ended with a flourish of flowering notes, the visual version of petals opening under a speed camera. ‘Unsaid,’ a song he composed about relationship break-ups and avoiding important truths, was melancholic and sad with a sense of inevitability and a touch of ‘c’est la vie’ hard realism to it. In contrast, the band’s interpretation of the age-old ‘Tiger Rag,’ made famous by the Mills Brothers in the 1932 comedy movie ‘The Big Broadcast,’ was bubbly and uplifting. And if deft guitar playing isn’t enough, Napoli also sings, and pretty darn well too.

In addition to the five concerts over a weekend, there were also workshops in guitar and violin. 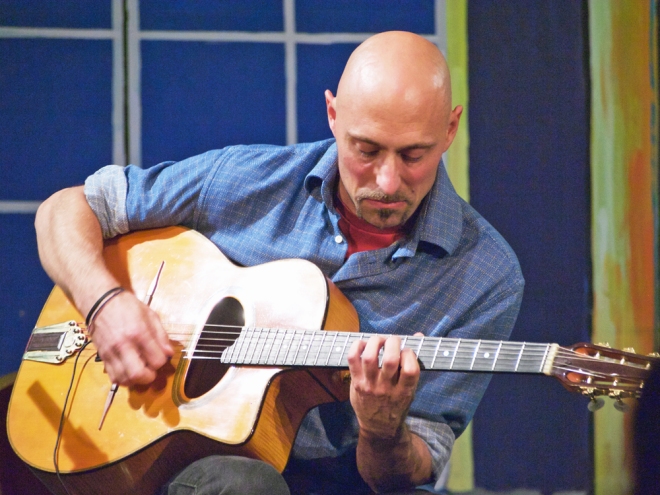 Dario Napoli from Cortona swept his listeners into an enthusiastic standing ovation with his fast-fingered guitar skills.

Full credit goes to festival organizers – Donough Cleary, Donal Casey, John Kinsella, Damian Doherty, Martin McGinley, Aisling Cleary, Ann Casey, Mary Kinsella, Violet Buchanan and Simon McCafferty. Cleary and his colleagues were obviously content with the festival’s success. “Django Sur Lennon has exceeded all our expectations,” said Cleary. “We had some truly exceptional musical performances over the weekend, big crowds at the concerts and a fantastic atmosphere for the pub gigs. Our workshops were also well supported. It’s all going to drive the development of gypsy jazz in Donegal. Watch this space!”