Shouts of celebration leaped from Donegal’s Gola Island ferry, ‘The Cricket,’ Sunday afternoon as holiday-makers from places as diverse as Cambridge, Brighton, London, Letterkenny and Belfast raised a warm cheer for newly-engaged couple, Donal McGee (29) from Falcarragh and Rosie O’Brien (28) from Dunfanaghy.

Being an incurable romantic, Donal decided an island was the best place to propose marriage to the woman he loves. But his good intentions almost fell asunder, giving the term ‘missing the boat’ a new meaning.

Having carefully planned his surprise and with beautiful engagement ring safely stowed away in his pocket, Donal – understandably somewhat nervous – called Sabba around 11 in the morning to ask if he was going to Gola.

“I replied I would be within the hour, and looked forward to seeing him,” said Sabba from Dore. “When he didn’t turn up at Magheragallon Pier, I was surprised and headed off with the other people waiting there. An hour later, I got another call from Donal saying he must have missed me. Again, I said I’d be leaving in an hour but again there was no sign of him when I set off. Then I got a third call from him saying he had been waiting for me at the pier but couldn’t see me. Puzzled, I asked where he was. That’s when the riddle was solved. He had been waiting all this time with his girlfriend at the wrong  pier, the one in Bunbeg.”

A happy Rosie shows off her engagement ring as husband-to-be Donal smiles with contentment.

But love is strong. It conquers all, including time.

Within the hour, Donal arrived at the right place with his fiancée-to-be, poised and ready to carry out his heartfelt wish and make his life-changing decision. The cheers that went up as ‘The Cricket’ plied the waters showed his request was warmly accepted by a contented Rosie.

While it was the first time Donal and Rosie had been to Gola Island, it’s a place they’re never likely to forget.

This was also a first for Captain Sabba and ‘The Cricket.’ Never before have they brought anyone across the waters to be engaged.

“I’m delighted and thrilled and wish Donal and Rosie a long and happy life together,” said the generous captain, granting the young couple free passage – to the shores of happiness.

Now word around the Gaeltacht is that ‘The Cricket’ may soon be renamed – ‘The Love Boat.’

Gola Island is one of the locations chosen as an inspiration for participants at the annual international ‘Ireland Writing Retreat.’ It is also a place that features in recently-published novel, ‘Pretty Ugly,’ linking this area of Donegal with the United States.

A gentleman if ever there was one, Dore man Sabba Curran wore an undisguised look of contentment seated comfortably in the captain’s quarters of ‘The Cricket’ gazing out beyond a sleepy sea to the quaint houses lining the crust of Gola Island.

Behind him, a lively group – young and old, locals and tourists – stood on the open deck breathing in deep draughts of fresh warm air under a clear, azure-blue summer sky (no, I’m not color blind, though with the torrential rain we’ve had since it’s hard to believe).

Though barely mid-afternoon, the Gola Ferry Service was already completing its fourth return trip from Maghergallon Pier, having started early Saturday before any of us had even finished our scrambled eggs and scones (okay, okay, maybe just me).

Meanwhile, the ‘island crew’ of Maureen Ferry, Sheila Gallagher, His Majesty, Eddie Joe Mac Aoidh, the Uncrowned Island King and family and friends, all members of the Gola Island Development Co-op, had finished their stuff.

Some lead a life of leisure and some gotta work – guess which is which!

A crowd of over a hundred was expected for the annual Gola Island Festival and things had all been put in order. Colorful buntings fluttered in the light breeze, the kettle was on the boil in the wee café (it really should have a name – any suggestions?) and assorted materials for an outdoor painting class were well in hand.

(l to r) Photographer and reporter from New York and Cologne on Gola Island ready to capture the ‘Pól’ moment.

Even the day’s star guest, bearded philosopher, polyglot and sea-forager, Derry-man-cum-transplanted Bunbegian, Pól Ó Muireasáin, was ready and eager to rock ‘n roll. He’d powdered his nose, coiffured his hair and got his bits and bobs together, ready to lead a merry band of Marine Apostles, including Der Spiegel’s correspondent from Cologne and a photographer all the way from the Big Apple, on a hazardous two-hour, search-and find expedition for monsters of the deep among the sand and rocks of the coastal inlets.

And what a delightful day it turned out to be.

King Eddie had a good ole chin-wag with his distant cousin, James Sharkey, now plying his trade in far-off Aberdeen; 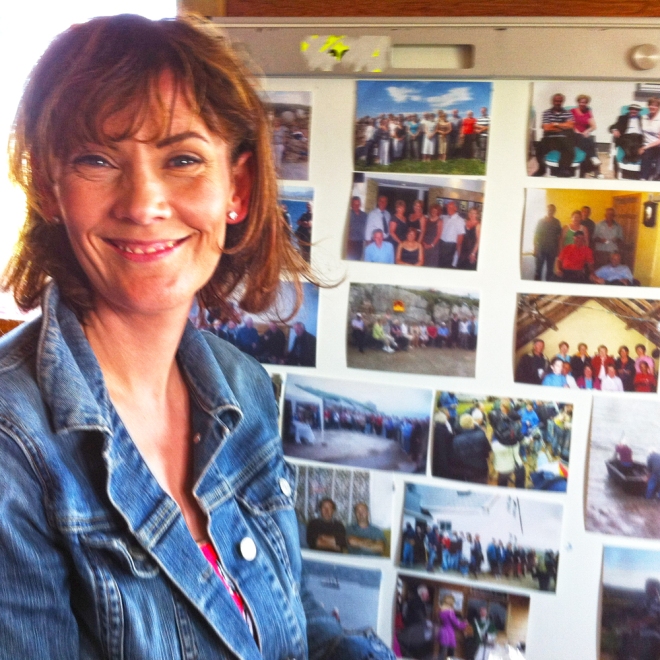 a smiling Marie Moloney-Pearson did her thing behind the café counter beside the island’s photo exhibition;

The Long and Winding Road…..Niall McCaffrey decides to takes a walk.

and boatman-cum-scriptwriter, Niall McCaffrey of TG4 ‘C. U. Burn’ fame, enjoyed a leisurely wander along winding paths (by the way, did you know his family name as Gaeilge is ‘MacEachmharcaigh,’ meaning basically, ‘son of a jockey’).

35 years may seem a long time, but it really ain’t, so treasure every moment.

There was also George and Yvonne Adams, a lovely couple from Hollywood (not the Tinseltown variety), who’d first landed on the island 35 years ago to celebrate their engagement and now had returned for a heartwarming taste of nostalgia.

Pól Ó Muireasáin explains to visitors the intricacies of the skeletal-muscular make-up of lobsters.

And to top it all off, there was the rare (the rarer the better) sighting of a shy and reserved Pól the Peacock perched on a stone wall stripping to his nifty boxer shorts singing a German ditty at the top of his voice having just splashed through hell and high water to ensure the life of a young and wayward lobster.

Yes, a most memorable day had by all.