Miriam O’Callaghan, the wealthy Irish RTE TV presenter (average total annual earnings estimated at over 500,000 euro) came under the hammer today after her appalling hosting of the ‘Leaders Debate’ Tuesday evening – and rightly so.

Her bias in favour of parties such as Fianna Fail, and her severe anti-Sinn Fein stand, is well-known. After all, her brother, Jim, is the Fianna Fail spokesperson on justice.

TV presenter Miriam O’Callaghan’s ‘fitness for office’ is being called into question. Even her co-presenter on the ‘Leaders Debate’ Tuesday evening, David McCullough, seems aghast by her blatant on-air bias.

And why she spent so much time criticising Mary Lou McDonald on justice issues. Even her co-presenter, David McCullough, seems shocked by her blatant bias as seen by his expression in the photo above.

For Miriam, I daresay, knows full well not only could her brother’s political career be in danger but also her own massive pay and expenses contract with RTE, a publicly-owned national station, if Sinn Fein gets into power after Saturday’s voting.

I’m referring not just about her huge salary, but also the lucrative contracts production company, Mint Productions, once owned by Miriam and her husband, Steve Carson, who himself worked for RTE, gained from RTE, thus providing even more generous amounts of income and well-paid jobs for their children.

And with Carson now working for the BBC, who could possibly have obtained in such a timely manner a verbatim transcript of an interview with Sinn Fein’s Conor Murphy on Paul Quinn from deep within the archives of the BBC 13 years ago to help Miriam grill Mary Lou with? Even more, who says that is a key issue in this national election, anyhow?

My own run-in with Miriam took place in a television studio when as a journalist I was invited to attend a conference.

Miriam started the day’s proceedings with a few generalities on media and later I asked her about the generous contracts, Mint Productions, gained from RTE.

“Do you or your husband not think these might be a conflict of interest as you worked for RTE in a senior position, as did he?” I asked her.

Her answer: “I don’t know anything about those things. My husband and I don’t discuss professional matters.” 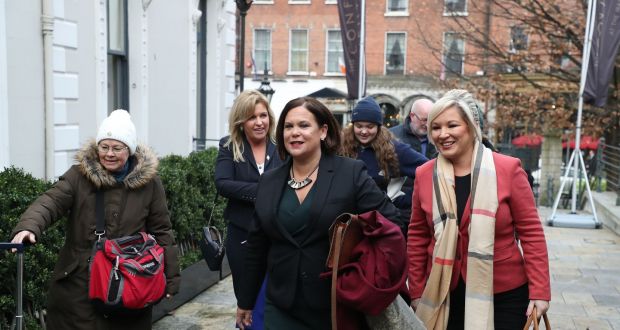 Tuesday evening’s unprofessional performance by Miriam, I’m afraid, was par for the course.

Four years ago, I wrote this blog on a ‘Election Leaders Debate’ that took place then, at which O’Callaghan was again less than shy about showing her bias.

‘Time for change – real lasting change – time to grow up, we Irish have prevaricated enough’

By the way, here’s a very short excerpt of Miriam talking to ‘Her’ magazine some time ago: The presenter is one of RTÉ’s biggest earners, raking in €300,000 per year but she said money is not a draw for her. “It’s not about the money, it really isn’t.”

My fervent hope is that the Irish electorate has learned over the last few years that certain influential, well-to-do people with much to lose if the old political duality changes will not hesitate to use whatever means necessary to prevent that happening.

Be careful whom you choose as your preferences on Saturday (and put it in pen, not pencil – just in case).