Interesting experiences fire the imagination, so it’s little wonder Danny Morrison has become master of both the written and the spoken word as author of numerous books, including fiction and non-fiction, short stories and plays, as well as being a newspaper editor, insightful radio and television commentator, community arts festival chairperson and elected public official.

‘Ireland Writing Retreat‘ is proud to welcome Danny as one of the guest trainers at this year’s event which begins at Teac Jack in Gaoth Dobhair at the end of June. Participants from places as diverse as Minnesota, Cork, New Hampshire, Dublin and Missouri are to attend this year’s international gathering.

I have met Danny on many occasions over the years, often at political, media and writing events (the most recent being at the Sinn Fein Ard Fheis in Dublin) and was honored when he invited me to speak at the West Belfast Festival that he chaired a few years ago. Interestingly, before knowing Danny, I knew his lovely younger sister, Susan, as she and her friends and myself and mine would strut our stuff, teenage-style at the weekly Clonard dances on the Falls Road to the sounds of Sweet, T. Rex, Mott the Hoople, Queen and David Bowie. Susan, now sadly departed, married a close friend of mine, John Patterson, who came with their daughter to my 50th birthday party at the Gaoth Dobhair golf club where we wandered down nostalgia road together. Danny and I have much in common, both being from Andersonstown and having attended some of the same schools, including St. Theresa’s Primary and St. Mary’s Grammar in Belfast. I admire greatly what he has suffered in his lifetime, what he has achieved and what he has become. It’s  wonderful he has agreed to come to the Donegal Gaeltacht to be a trainer at this year’s writing retreat but also to take part in a special Q&A public event at Teac Jack about his life. 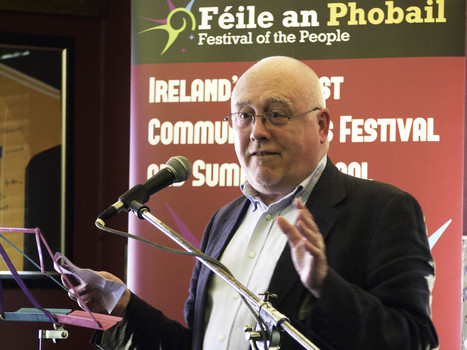 Born in Andersonstown, west Belfast, the friendly, down-to-earth Irishman has led such an intriguing and eventful life, including internment without trial and imprisonment for eight years while barely in his 20s, that it has imbued him with multi-faceted views on both the world of politics and the world of literature.
Morrison grew up in a solid, working-class family, reaching teenage years just as the so-called ‘Troubles’ in northern Ireland erupted, with civil rights protests becoming widespread, then civil strife and finally a peace agreement based upon a fairer and more just society for everyone.

As a young man, influenced by what was happening around him and the anti-Vietnam protests in the US, Morrison developed a yearning to write and a need to confront injustice. When his sister loaned him the money in 1971 to buy a typewriter, his fate was sealed.

Later, both before and after becoming editor of An Phoblacht/Republican News, he wrote many articles, political pamphlets and even scripts for documentary films on Irish history until, in the 1980s, he became national director of publicity for the Sinn Féin political party.

His love of creative writing flourished even in jail and led to Morrison’s first novel, ‘West Belfast,’ being published in 1989 but never formally launched. In 2015 a revised edition was re-issued to celebrate the 25th anniversary of the first publication. ‘On the Back of the Swallow,’ his second novel, was written in prison and published nine months before his release, in May 1995. ‘The Wrong Man,’ his third novel, also begun in prison, was completed after his release and published in 1997. Morrison’s three works of non-fiction are: ‘Then The Walls Came Down,’ based on his prison letters, published in 1999; ‘All The Dead Voices,’ a part-memoir, published in 2002; and ‘Rebel Columns,’ a collection of his political writings, published in 2004. He edited a book of essays, ‘Hunger Strike,’ which was published in 2006 by Brandon. His fourth novel, ‘Rudi – In the Shadow of Knulp,’ inspired by ‘Knulp,’ the 1915 novel by Hermann Hesse, was published in 2013.

His writing also spans the short story format leading to published work in various magazines and broadcasts on BBC, RTE and Lyric FM radio. Interestingly, ‘We’ve Got Tonite’, a love story he penned, was banned by the BBC in 1992 despite having already been recorded. He also adapted ‘The Wrong Man’ for the stage. The play was hosted in London, Edinburgh, Belfast and Dublin and was nominated by ‘Fest’ magazine as one of the top three dramas of the 2005 Edinburgh Fringe Festival.

Morrison has also written articles for such prestigious newspapers as ‘The Irish Times,’ ‘The Observer,’ ‘The Guardian,’ “The Washington Post’ and ‘The Boston Globe’ and is currently working on a fifth novel, ‘Band on the Run’ and a play, ‘The Mental.’

For a number of years, Morrison has been in strong demand as a trainer of creativity writing and recently completed a writer-in-residence program in Berlin.