Ever seen luminescent plankton sparkle at night like scuba-diving fireflies?
If not, then maybe you should take an island tour with Captain Gareth Doherty of Selkie Sailing as I did several days ago on his 22-foot Drascombe long boat.

Setting off from what I call ‘Ernie’s Place’ (Bun An Inver harbor, opposite Teac Jack) just as the sun was setting, we headed across tranquil water to Sceard Iompainn (Umfin’s Blowhole) near Béal Scealp Uí Dhúgáin (Duggan’s Sea-Arch), its russet-red rocks sliding smoothly to the sea.

Interestingly, as Pól Ó Muireasáin, our Gaelic linguist on board, pointed out, the island of Iompainn may have derived its name from the older spelling, ‘Iompthoinn,’ meaning ‘turning wave.’ Opposite Béal Scealp Uí Dhúgáin is where I normally fish off the side of my boat ‘Radharch na Coco’, catching sizeable pollock, but also losing plenty of lures and weights in the process, tangled in the heavy seaweed there.

Dare I say it for fear of ridicule, but once I even lost a fine rod there – left unattended in the stern of the boat, a group of conspiratorial avenging fish dragged it down to the murky depths before I could scamper back and rescue it.
From Béal Scealp Uí Dhúgáin, we floated gently on the placid surface for a while indulging in a spot of fishing while marveling at the glittering plankton in the water beside us dancing mightily as if high on ecstasy at a fairy rave party.
Our night tour then took us to Gola (Gabhla – the place of the fork, alluding to the two hills as seen from the mainland); Tororragaun (Tor Uí Arragáin, Harrigan’s Outcrop); Inishmeane (Inis Meáin, Middle Island); and Inishsirrer (Inis Oirthir, East Island).

A chat at sea with local coastguard, Joe Curran (in orange) and Antonia Leitner from Austria (front left) helps pass the day away. Photo by Sean Hillen

There’s nothing as peaceful on a lovely evening than to be on a boat on calm seas in good company, chatting idly about this and that. And that’s exactly what we did, with subjects ranging from the fate of the Irish language to the wealth of wildlife off Donegal’s shoreline and Gareth’s peck on the nose from a nervous gannet (And, on a more cultural vein, needless to say Daniel ‘Travolta’ O’Donnell’s chances of capturing the Sam Maguire Cup of classical dance for the glory of Donegal – just joking).
Several things impressed me about Strabane-born Gareth Doherty on this trip.
The slim, bearded sailor loves the sea and all things associated with it, including a heartfelt concern for the environment and the birds and sea creatures that inhabit it.
“As a keen naturalist, the bird and wildlife around the coast here is truly spectacular,” he says. “And there’s so many different ways to enjoy them. Every time I cast off from the shore I have a feeling of anticipation, knowing the rewards that await me. The moment I switch off the engine and hoist sail, this transformation encapsulates for me an ancient tradition.”

Illustrating his concern for wildlife, Gareth and his wife, Amanda, from Sunderland, helped establish the ‘North West Whale & Dolphin Support Group’ consisting of local like-minded people keen to learn how to save stranded sea mammals. The initiative followed the ill-treatment of a pod of 13 pilot whales left to suffocate after five days on Ballyness beach near Falcarragh. It was the 13th such stranding last year in Donegal. 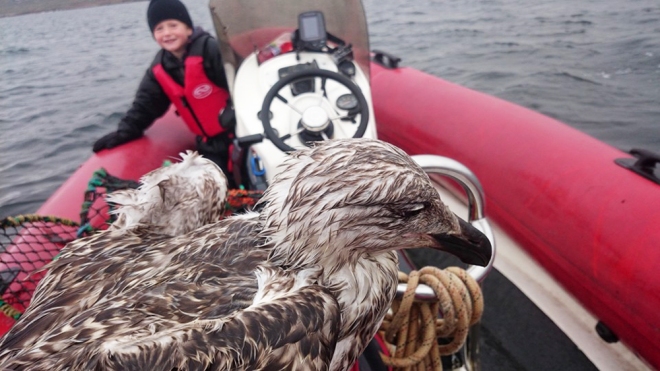 Gareth, who lived in Black Isle, near Inverness and Dunoon in Argyll before moving to Donegal seven years ago, (his three children are named after Scottish islands – Skye, Rona and Arran) is a gold mine of marine information.
Well-qualified – he is a dinghy instructor, day-skipper, offshore yachts-master and is trained in advanced power-boating – his deep knowledge ranges from details on wildlife to be found around the Continental Shelf lying 50 miles off the Donegal coast to the characteristics of the waxy oil that dripped from a sperm whale stranded on Magheraroarty (Machaire Rabhartaigh) beach several weeks ago.
The 44-year-old’s passion for the sea originates in great part with his grandfather, Paddy McCauley, who spent much time in Inver, Donegal. “As he was a keen sailor and fisherman, some of my earliest memories are of being on the sea,” he recalls.
Now Gareth has transformed his indefatigable passion into a creative entrepreneurial venture. Aside from the Drascombe long boat, Selkie Sailing, based in Derrybeg, has many other craft – a gaff rig, topper sailboats, a catamaran, kayaks, a rib and a banana boat: more than enough to host guests on adventurous excursions among the many islands, sea arches and caves. Sailing classes take up much of Selkie’s activities. 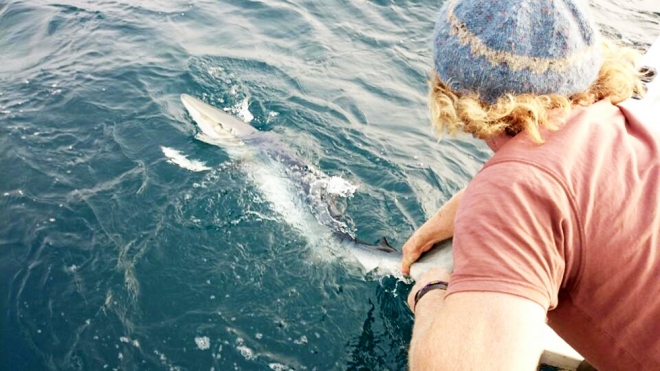 Gareth caresses a blue shark, four miles off Inishsirrer near the wreck of the steamship, Boniface, torpedoed during World War One. Photo courtesy of Selkie Sailing

Gareth says different seasons bring different sights. “Spring sees a migration of Arctic Skuas, Sandwich Terns and Gannets with occasional rare visitors like the Short-Eared Owl,” he explains. “Summer days are filled with the song of the Skylark and ground-nesting birds like Oyster Catchers and Ring Plovers, with sea-cliffs harboring colonies of shags, cormorants and fulmars. Chances of seeing an otter, a basking shark, a bottlenose dolphin or a porpoise are higher then. With autumn come Sandlins and Dunlins while seal pups rest on the rocks and the sandy beaches of the islands. Brent and Barnacle Geese rule winter, taking advantage of the sea swells to feed. Sometimes, a long-tailed duck may make an appearance.”
Two proposed projects excite Gareth. One is in education – to teach children in local schools about the marine environment and its sea and air inhabitants. The other focuses on Minke whales. “They’ll start to appear over the next month and I’ve organised two underwater photographers and a cameraman on a drone helicopter to shoot their behaviour,” he says excitedly. “It may be the first time this has ever been done in Ireland.”

Efforts by Amanda and Gareth Doherty aim to save many stranded whales, dolphins and other sea life such as this.

As to the name ‘Selkie.’ It’s a mythical creature; half man, half seal which comes on to the land and removes its outer layer of skin to reveal itself as a beautiful, dark-eyed human. Like the mermaid, selkies have been both praised and feared. Stories describe how they helped sailors in rough storms but also how they lured people into the sea. Another yarn tells of a man stealing the skin of a female selkie to trick her into being his wife.
As Selkie Sailing’s motto states – “Where the shore ends, the advenure begins,’ you never know, perhaps a trip with Gareth might end up in a fortuitous meeting with one of these intriguing creatures.