Now the friendly Donegal man is one of the most respected beekeepers in Ireland, raising around one million bees a year plus about 100 all-important virgin queens at ‘An Earagail Apiary’ in the picturesque village of Dunlewey in the shadow of legendary Errigal Mountain.

Father and son, Anthony and John, stand proudly together in their apiary in the shadow of Errigal Mountain in Donegal, northwestern Ireland.

Such is his devotion to his hobby, one that dates back to ancient Egypt and Greece, Anthony (54) is also a member of The Federation of Irish Beekeepers’ Associations, and secretary of ‘Three Rivers Beekeepers Association,’ a group with about 110 members spread across Donegal and over the border area into Derry.

Anthony and his colleagues are organising the ‘North West Honey Show and Conference’ starting this Sunday at 1pm at the CPI Centre in Castlefinn in Donegal.

Not only will there be expert speakers including Suzie Hill, Jim Loughrey and Lyndon Wortley, but also a panel of honey judges including Tom Canning, Hugh McBride and Lorraine, together with honey show manager, Gary McConnell. There will also be a wide range of products on display, from beeswax candles to honey cakes and biscuits, as well as artistic exhibits and miscellaneous classes ranging from photography to needlecraft, painting and pottery.

Anthony himself became enamoured of the flying insects after learning about their complex communities accidently while attending workshops in apple grafting in Leitrim some years ago when a specialist talked about the subject. 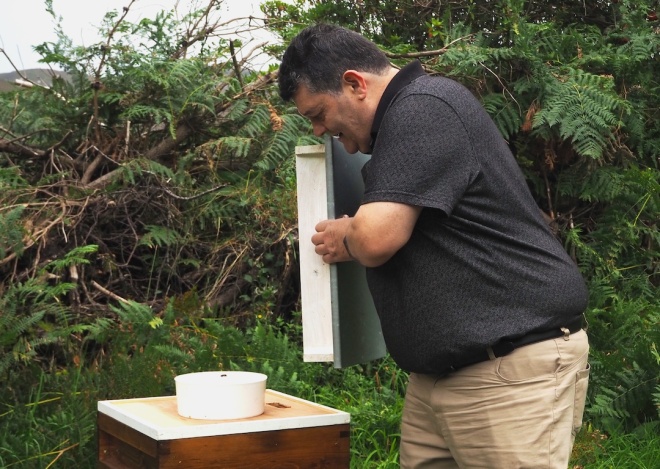 Anthony checks all is well with his flying friends.

“Beekeeping should be for everyone,” an enthusiastic Anthony told me as he and his teenage son, John (17), showed me around their aviary recently. “It’s not rocket science and the huge benefit is that you have your own steady supply of honey which has a multitude of health benefits and a shelf life of up to five years or so.”

Anthony nurtures between 20 and 30 hives every year, with all-year six breeding stations, and hopes to double that number next year. While there are over 16,000 known species of bees, the species Anthony breeds is known as the black bee. It can adapt best to Donegal’s long winters and its dampness and lack of sunshine.

Hundreds, if not thousands, of researchers worldwide are analysing the beneficial properties of honey. It has already been proven that this sweet everyday substance is rich in antioxidants, helps lower blood pressure, improves cholesterol levels and lower triglycerides, a risk factor for heart disease. It can also suppress coughs in children. Topical honey treatments have also been used to heal wounds and burns.

Learning from the Master.

As a result, even though the law in certain countries, including Ireland, restricts publicising the medical benefits honey offers, peoples’ interest in beekeeping has soared.

“Interest has gone through the roof,” says Anthony, who only started beekeeping five years ago. “And you only need three things – shelter, water and sunshine.” This accounts for the fact that Anthony now raises around 250,000 bees every year for other people’s colonies.

Anthony’s aviary is on a 5-acre stretch of lands but he hopes to expand to seven next year.

“The bees feed on a range of trees and plants, they pull sap from everything,” he said. “Willow, pine, heather, Japanese knotweed, hawthorn, Himalayan balsam, phycia, bramble, windbushes and blackberry, to name but a few.” 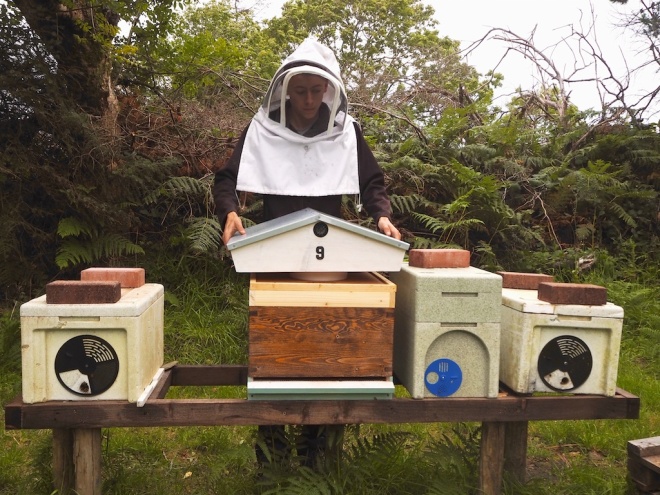 Well-protected, just in case, John lifts the lid on things.

Anthony, who works six days a week from April to July, the busiest time of the year for beekeepers, was also involved with ‘Three Rivers’ in a special environmental awareness day in January in Glenveagh linked to beekeeping. “Illustrating the increasing level of interest, more than three hundred people came to that event,” he said proudly. “Among our speakers were master beekeeper, Mark Wallace, university professor Doctor Saorla Kavanagh, who has conducted well-respected research in heather honey, Duncan Stewart, environmentalist and TV personality, as well as Joanne Butler from OURganic Gardens, Gortahork, Juanita Browne from Pollinator Ireland and Cepa Giblin, a wildlife film maker.”

Anthony’s teenage son, John, also heavily involved in the family operation, with marketing his main focus, said, “We’re selling honey directly from our home now, but hope to sell from some shops in the area next year.” The Gallaghers also make their own mead.

Satisfied faces – Anthony and John with what is considered among the best honey in Ireland.

Interestingly, while the work done by bees is crucial for Man and the Earth’s very survival, and because their mission is such hard work, the lifespan of a female bee is only between four and five months.

An average hive has about 40 to 60,000 bees with the all-important queen bee capable of laying around two thousand eggs per day. All worker bees are female while the males (drones) are only used for mating. The bees will forage up to three miles from the hive and the queen will fly up to seven miles to mate.

So, for an intriguing outing, head to Castlefinn this Sunday. With an entry fee of just five (5) euro, it’s a gift as sweet as pure honey.

NB – There’s another vital reason why it’s worth going to Castlefinn tomorrow, it could be your last chance to see these important insects up-close. Bees, now considered the most important living beings on Earth, have entered into extinction risk – https://science-andinfo.blogspot.com/2019/07/the-bee-is-declared-most-important.html?m=1