“Some people believe football is a matter of life and death. I assure you it is much more important than that.”

I was reminded of these memorable words of famous Scotland-born, Liverpool manager, Bill Shankly, as my spirits sank beyond despair in the bar of Teac Jack’s in Gaoth Dobhair, Donegal last night watching the team I have supported for the last 50 years of my life make a sow’s ear out of a silver purse.

Such was my wretched state of mind, my dear wife, Columbia, bought me bottle upon bottle of Kinnegar Rye extra-strength IPA in an effort to fortify my flagging spirits and Donal, the genial barman, meandered by my table several times his usual jovial smile replaced with a shadow of concern, trying to ascertain with that innate talent only a skilled barman possesses whether I was in need of an urgent dose of CPR, or at the very least, some immediate psychological counseling.

This was to be West Ham’s ‘BIG NIGHT.’ The last ever FA Cup match after more than 100 years playing there at the Boleyn Ground (Upton Park) in London’s East End (the ‘real’ London where Jack the Ripper so generously plied his trade, where people say ‘apples and pears’ for stairs and ‘Khyber Pass’ for ass – a unique language best illustrated by the late Ronnie Barker in his ‘Rhyming Slang Sermon’ skit).

It was here amid a lively capacity crowd booming out the team’s – rather unmanly – theme song ‘I’m Forever Blowing Bubbles’ that the ‘Claret and Blues’ were to halt the march of the Mighty Red Army, then stride on proudly and purposefully to Wembley glory, both events being very rare occurrences in the annals of Hammers sporting history.

This was to be West Ham’s final adieu before it starts the new season at the sparkling new Olympic Stadium, a fitting goodbye to the old homestead for a team that modestly started its life in 1895 with a bunch of welders, plumbers, brickies, electricians and other tradesmen, known as Thames Ironworks FC, who themselves were built upon the remains of Old Castle Swifts FC, a club formed in 1892.

Sadly, things – as you may have already heard and certainly as you can read below – didn’t go quite according to plan.

However, as it was an historic game, for what’s worth – below is my one and only West Ham match report…….

Overall West Ham were pretty woeful last night against a bunch of inexperienced kids in Red with a lot of enthusiasm – in effect an experimental transitional team.

Hammers burst their bubble big time, and no worse time to do it, in the very last FA Cup match at Upton Park after 100 years, only one match away from double Wembley glory, against both the Toffees and Palace. 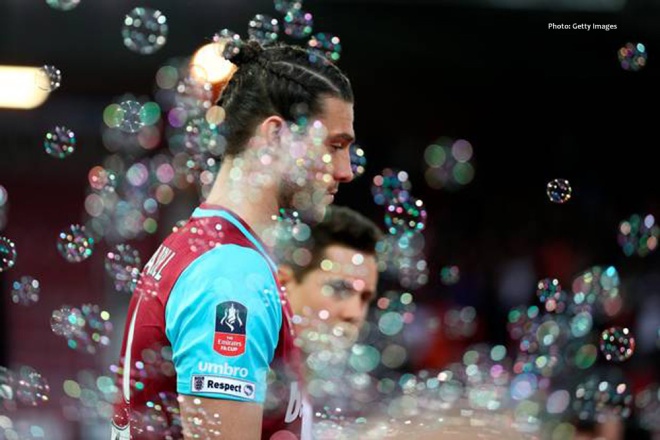 Bubbles bursting all around. But no champagne.

To use an old baseball term, they didn’t even step up to the plate. Aside from a final, frenetic 12 minutes gurgling-for-air display, they sank – in a flurry of bubbles – pretty much without trace.

MU are never easy to beat. Their enviable reputation alone means they step on to a field a goal ahead psychologically. West Ham are far from that and last night proved it. After all Bilic’s pre-march talk of not being afraid – that’s exactly what they were (in front of their home crowd too which, in itself, says a lot). West Ham simply doesn’t have the class it takes to win when it matters, during the big occasions. I guess it’s a mindset that enters a team’s DNA at some point in their development (strengthened by continued success, of course). And it’s not all about money either (though that helps). West Ham is nowhere near that point yet – class or money.

Right now, they are apprentices in the trade, not craftsmen. Silver perhaps to MU’s platinum.

Their best ‘move’ came when Mark Noble carried off a melodramatic Ander Herrera. Aside from that, MU dominated the match, carried the ball forcefully and confidently into the Hammers half and punished them severely.

The beginning of the end.

They say you haven’t supported a team until you’ve experienced some pain – watching the SH_T West Ham troweled up last night on what was billed as their ‘BIG DAY’ was rather agonizing. The result simply added more salt to wounds that just won’t heal – the double shot-double save and rightly disallowed goal near the end last night being the vinegar. That’s five successive matches at least without a win to their name.
And as for that ludicrous out-swinging corner by Payet with a minute to go, with big Tompkins and Carroll waiting on the six-yard box to pounce  – what was the little island man hoping his captain could do – perform a soap opera-style ‘East Enders’ miracle. 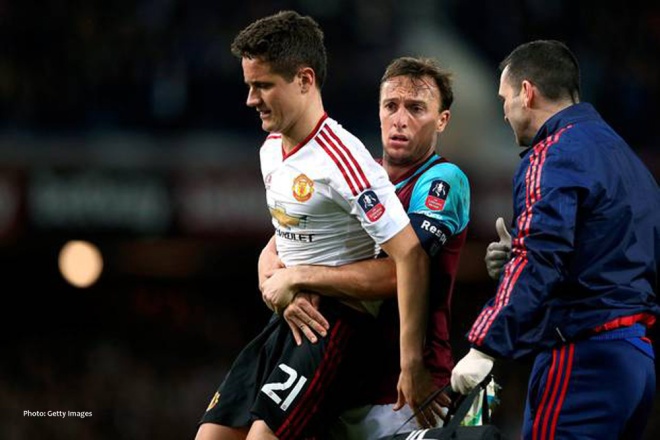 It only remains for West Ham to beat MU in their final home game (which I think they will) but even that will be lame consolation after last night’s winner-takes-all flop – unless that crucial 4th place/Champions League spot is still in play, which could be, considering the two Manchesters are still in Cups, and may tire – in saying that, I do not want the Hammers to beat Leicester this Saturday, by doing so, they could help ruin a perfect modern-day football fairy story.

If West Ham don’t beat MU on that final home league game at Upton Park, it will be the most whimpering of ends to a season that just six weeks ago seemed like it could provide a delightfully thrilling finish for them.

As the waiter-cum-football-fan asked an over-the-hill George Best in the room of his 5-star hotel with Miss World in his bed, “Where did it all go wrong?” Obviously here, Hammers manager Slaven Bilić doesn’t know.

West Ham must have been hoping for miracles last night. They brought on Moses (who did, after all, part the Red Sea, but alas, obviously couldn’t part the Reds).

Having said my piece, I’m off now to do my duty as a faithful football fan who’s just watched the team he has supported loyally for most of his life nonchalantly toss away yet another dream-in-the-making – to throw up soundly in the toilet.

One thought on “Football: just a game? Or a complex metaphysical belief system?”