Easter Monday 1916 Revolutionary celebrations in Dublin had its up and downs, its successes and its disasters.

And I was fortunate to have experienced many of them.

First prize goes to Mother Nature. Realising the heroic efforts of the men, women and children of the Rising had been pretty well ignored by the average JoeMacBlow in Ireland back then – it decided to put on a special show for the centennial.

And what a show it turned out to be, perhaps the brightest, prettiest, sunniest day this year. One that brought out thousands of Irish people to walk the sacred walkways tread by Connolly, Pearse, Plunkett and co., with many of the people wearing turn-of-the-20th century clothing, including tweed waistcoats, flat-caps, bonnets and brogues.

Being from West Belfast, I was also delighted to learn that security for Easter Monday’s 1916 commemorations in Dublin was organised by MICAB, the company owned by Andersonstown-based, former Republican prisoner, John Trainer. I guess all that experience in ‘security operations’ we got over the last few decades up North helps. 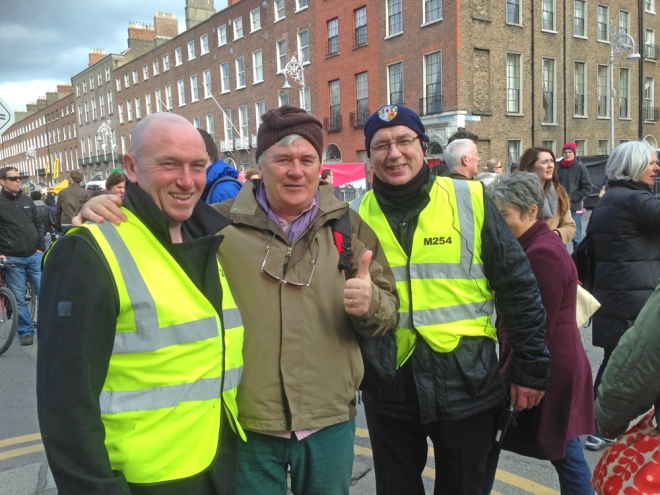 Meeting friendly security guards from Ardoyne at the Dublin 1916 Easter Monday celebrations was an utter delight.

Last prize on the sacred day goes to highly-paid, long-time RTE Loyalist, Miriam O’Callaghan. Behaving like a Russian doll with seemingly nothing inside but herself, she got smaller and smaller as an event she hosted entitled “Reflections on Exile – How we are viewed by our American cousins” at The Gaiety Theatre near Stephens Green wore on. 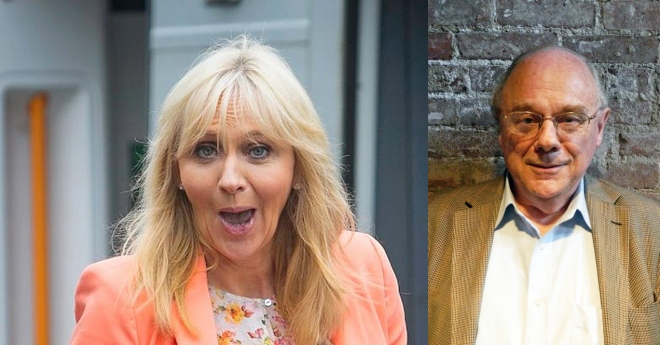 Oops! Overpaid RTE presenter, Miriam O’Callaghan, made a few screw-ups on Easter Monday- none more woeful than to eminent historian John Lee at a packed event at The Gaiety Theatre during Dublin’s 1916 Rising tribute events.

Dear Miriam, salary in excess of 300,000 euro, plus expenses, made so many gaffes, she became comical entertainment embodied.

First of all, she had the talented musician-cum-singer Mick Moloney perform his lovely rendition of the ballad, ‘James Connolly,’ twice as RTE’s ineptness meant it had failed to record him properly.

Then, speaking to eminent New York University Irish history professor John Lee, she said, “Is that the proclamation of independence you have there on your knee? Do you know how important that is?” The solemn professor looked aghast.

Later, in a pathetic transplanted D4 attempt to redeem herself, the misguided O’Callaghan asked the same unfortunate, “Let’s talk some more about 1916? How important was it?” adding for assertive emphasis, “Spell it out for me.”

Mairead Mooney of Donegal-based Altan fame deserves strong credit for her words and her singing, though dressed as she was in an All-Black outfit, one might have thought she was a cheerleader for the New Zealand rugby team. But with that sulky-blonde-hair-all-down-my-back look lending her that unique sexy-sensual-come-get-me-wide-eyed-innocence combo, she sang a beautiful, unaccompanied version of ‘Roisin Dubh.’ 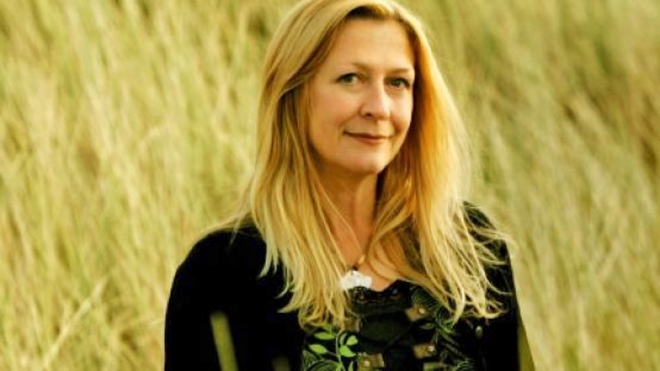 Entering the political arena, Mairead Mooney, lead singer and fiddle-player with Donegal-based Altan, said at an event at The Gaiety Theatre on Easter Monday that the 1916 Irish rebels would “turn over in their graves” if they saw what Ireland had become.

Then, sitting on the ‘intellectual’ couches with Lee and Armagh-born Pulitzer-prize-winning poet, Paul Muldoon, for the Q&A session (probably under her PR minder’s guidance to raise her profile for a future Senator’s spot on the Arts and Culture panel when Sinn Fein rises to Government status), she said, bravely enough, “the rebel leaders of 1916 would probably turn over in their graves to see what Ireland has become today,” adding, as a matter of course, “more money should be given for the arts. After all, that’s what Ireland is known for throughout the world.” (And there I thought it was for widespread nepotism, corruption and political and financial incompetence). 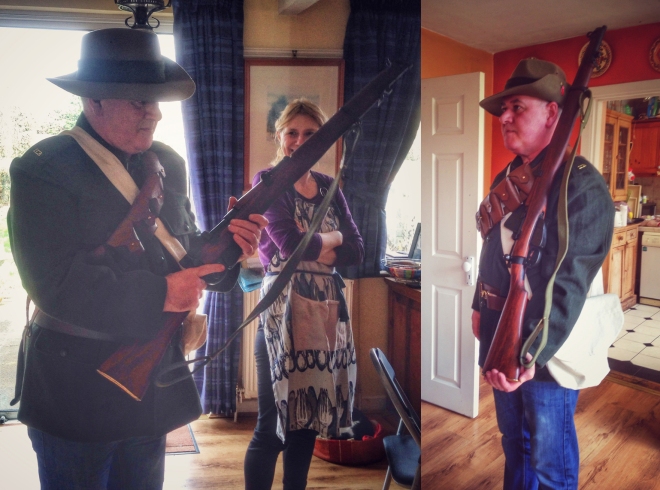 My younger brother Joseph practices his routines as a member of the Irish Citizens Army, encouraged by his Brasov-born partner, Angela.

Then there was my brother Joseph. So proud of him, I am. Selected to march up O’Connell Street on Easter Sunday, he was also chosen to be a member of the Irish Citizens Army and promptly dressed up in suitable 1916 attire the very next day to re-enact the Battle of Ashbourne, the only victory in the entire revolution. And that was just a few of his duties over the Easter celebrations. 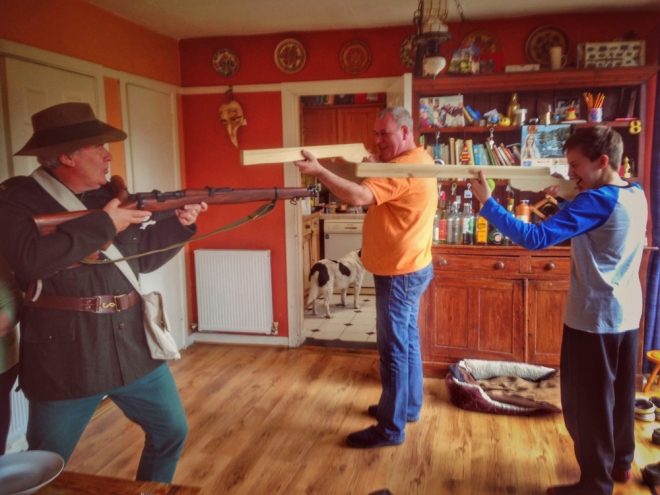 Two against one isn’t fair, but having commandeered my brother’s Lee Enfield, I obviously have the upper hand against Joseph and our nephew. Dara.

When I left Dublin this morning, he was headed to Liberty Hall for yet another event he had been asked to participate in at which President Michael Higgins spoke.

And last, but not least, my Transylvanian-born wife, Columbia, now an Irish citizen, who duly took up with a Republican group and marched proudly (with me alongside as dutiful husband) past the GPO, Dublin Castle and the Four Courts to Kilmainham Jail where rebel leaders were executed. 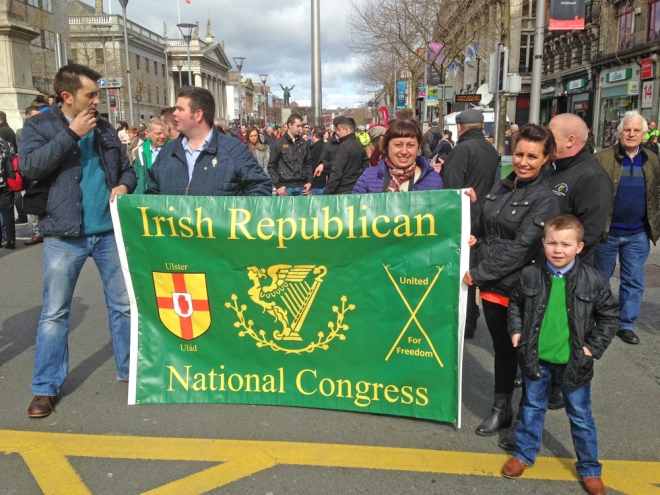 My Transylvanian-born wife, Columbia (in blue, with scarf, and the only person with such a name among 21 million Romanians) displays her Republican spirit on O’Connell Street on Easter Monday.

So let’s wait to see what the next 100 years brings. Considering her birthplace, Columbia may be the only one of us alive then.

2 thoughts on “1916 celebrations: a mixed basket of Easter eggs”