Ever tried reading James Joyce’s ‘Ulysses’?
Only 800 pages, more or less, a quarter of a million words, characterised by convoluted, stream-of-consciousness prose, meaning some sentences aren’t really sentences and those that are seem like they’re not.
Not to mention every chapter relates to an organ of the human body and also that while it’s about a day in the life of Dubliner Leopold Bloom, it’s also about the Mediterranean Sea adventures of the ancient Greek hero in Homer’s epic poem.
Like me, you probably stopped reading after 10 pages or so.
Now try imagining not only reading all 800, often unpunctuated, pages but transforming it into a captivating play entitled ‘Extracts from Ulysses,’ then coaching a large group of amateur actors in the backroom of a community center in a rural west Donegal Gaeltacht to deliver a delightful 90-minute theatrical production. 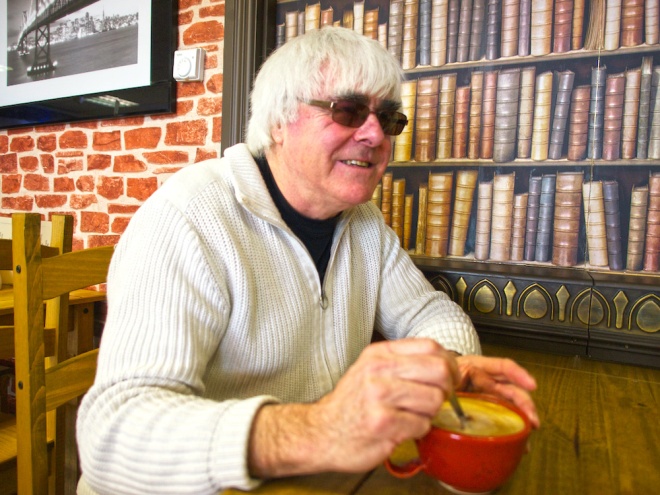 Enter stage left, Murray Learmont, thespian extraordinaire who turned 69 a few days ago and has not only directed a plethora of theatrical productions during his 20-plus years in the drama field, but has himself played roles as diverse as Captain Renault in ‘Casablanca,’ Polonius in ‘Hamlet,’ a preacher in ‘High Noon’ and Simon Dedalus, father of Stephen Dedalus, the hero in ‘A Portrait Of the Artist As A Young Man.’
On Bloomsday (Tuesday, June 16), Learmont and his enthusiastic, skilled troupe, the Cloughaneely Players, will perform their unique production before a hoped-for capacity audience in Arnold’s Hotel, Dunfanaghy Donegal, at 9pm. Don’t miss it. It’s a rare dramatic treat. 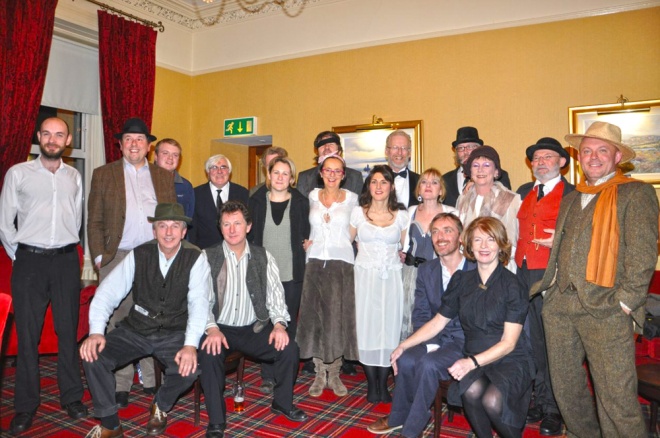 Together as One. (Photo by Moses Alcorn)

So why tackle such a complex literary challenge?
“It’s such a wonderful story of human experience, with such powerful dialogue,” says Murray, sitting over a coffee and a huge chunk of chocolate cake (mine, he was much more disciplined) at ‘Moonshine Café’ in Letterkenny last week. “It contains so many worlds within it, being the classic tale of Ulysses in a colourful turn-of-the-20th century Dublin setting with even a biscuit-tossing scene in the bar in the first chapter relating to Polyphemus, the one-eyed giant, hurling a huge rock at Ulysses.” 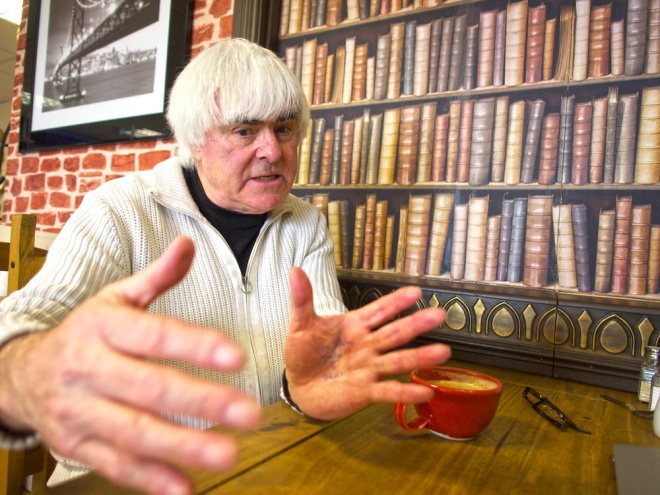 Ever-passionate about matters of the stage (Photo by Columbia Hillen)

Speaking passionately, he adds, “In Joyce’s novel you never lose the sense of surprise. While scenes fit into nicely one another, he surprises your expectations. The pitiful blind boy swearing at someone who accidently bumps into him – “God’s curse on you, whoever you are! You’re blinder nor I am, you bitch’s bastard!” being but one example. The author also makes no concessions, leaving it up to the reader to find things out. It is a modern piece both in thoughts and ideas, about relationships, and many of its themes are still very much relevant today.” 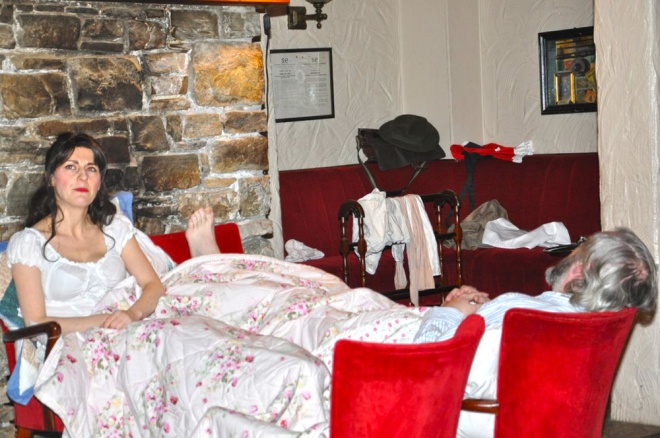 As for the task of reducing 800 hefty pages into theater form? “ I must say, the cut-and-paste capabilities of a modern-day computer really helped,” says Murray modestly, smiling. “But what I was really looking for was memorable dialogue and there’s just so much of that it wasn’t too difficult. Joyce captures exactly the way people speak. Of course, there were certain scenes I definitely wanted in like the bar scene where the one-eyed citizen abuses bloom in an anti-Semitic rant and the scene in the Ormond Hotel with the two barmaids laughing, saying ‘ “Aren’t men frightful idiots,’ which relates to the song of the Sirens in the classic myth.” 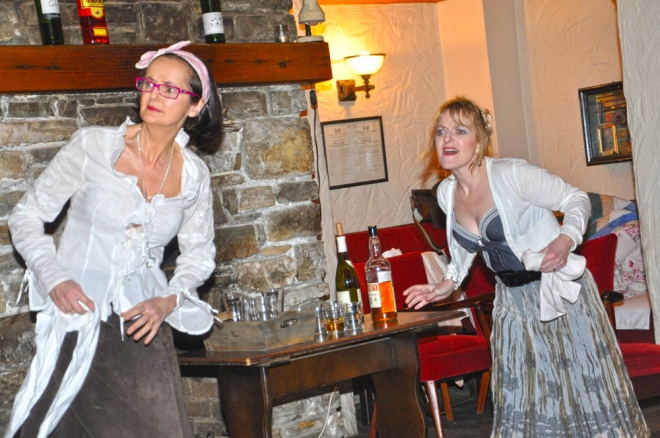 What’s that you say? (Photo by Moses Alcorn)

With a previous performance several weeks ago having met with strong positive reaction and the next due soon, how does he feel? “Very happy. It has been great fun doing what is, in effect, an ensemble production. Around 20 people, with everyone putting in their ideas. It has been a labour of love and, of course, I’m delighted it has been received so well.” 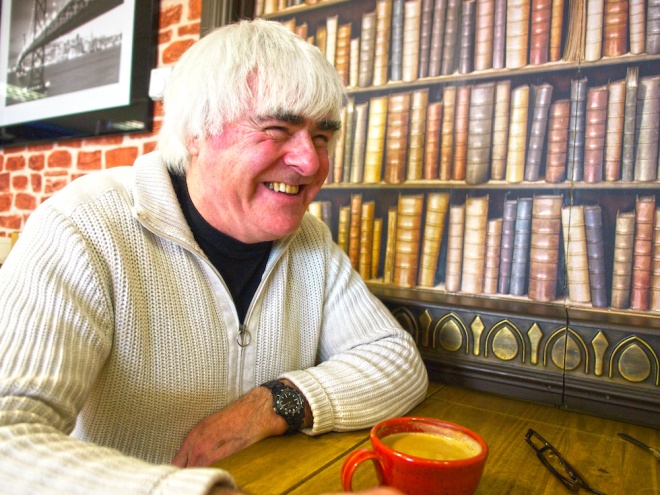 Murray Learmont: Serious about the stage, but with a ready laugh  (Photo by Columbia Hillen)

Murray, who first read ‘Ulysses’ while in his 20s studying English literature at Glasgow University, had particular praise for lead actor, Pearse McGee, who plays Bloom and is on-stage throughout and for Maggie McKinney, who plays his wife, and has a challenging soliloquy at the end.  Aside from the actors, Murray also praises Robert Shields, owner of Clady Media in Crolly, who supervised the sound system and Joanne Lindsay-Butler for set design. 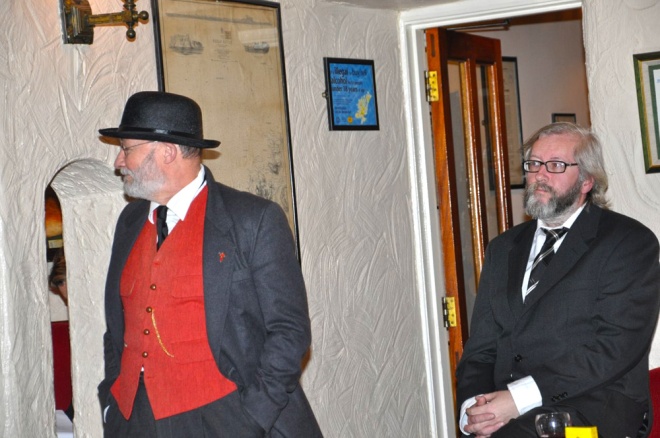 Whatever you do, don’t look the other way! (Photo by Moses Alcorn)

Speaking about Joyce’s work and his role in the production, McGee said, “The novel deserves its reputation. It is a law onto itself. While it is, granted, a dense, multi-layered and hard-to-handle beast of a book, the sheer exuberance of the language can carry you through it, if you let it.”
On playing Bloom, he added, “It was a tough ask to get into the head of one of the great everyman characters, especially then having to portray him as the public man without showing the audience his inner thinking. Murray’s patience and boundless enthusiasm were invaluable to me in getting there and his sheer love of the source material clearly shone through at rehearsal, which helped to take a tough job and make it fun.” 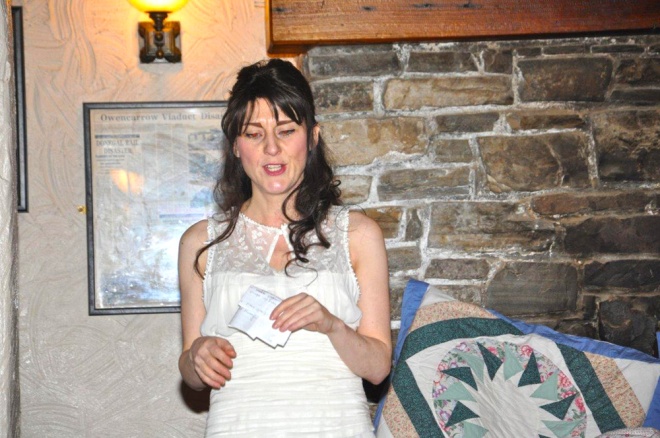 Pretty as a picture, but what’s that in your hand? (Photo by Moses Alcorn)

McKinney, whose previous diverse roles have included Lady Macbeth, Ophelia and Helena in the Shakespearian classics “Macbeth,’ ‘Hamlet’ and ‘Midsummer Night’s Dream’ and a chorus girl in ‘Some Like It Hot,’ said she “loved” playing Molly Bloom. “I had not read the book, so it was interesting to learn about it. To begin with, the soliloquy was a little challenging, as it is Molly Bloom’s stream of consciousness and James Joyce left it unpunctuated and her thinking often flits from one memory to another, so it took a while to decipher this. Also, some of my lines were a bit risqué and I was a little concerned I might be shunned in the local community for using such improper language, but in context of everything else I had to say it worked and wasn’t too shocking, thankfully!” 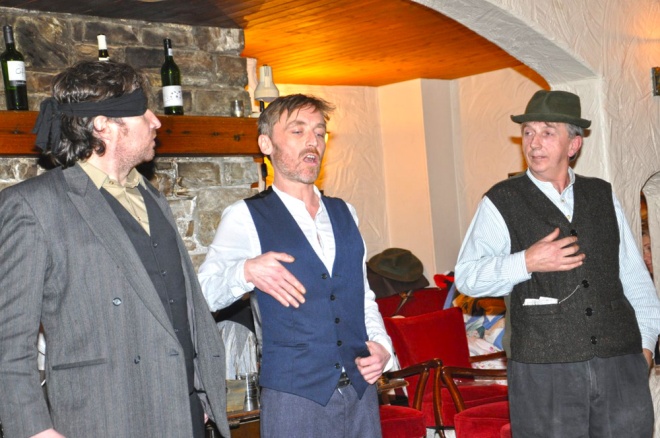 Honestly, hand on heart – if I can but find it, I know it’s here somewhere! (Photo by Moses Alcorn) 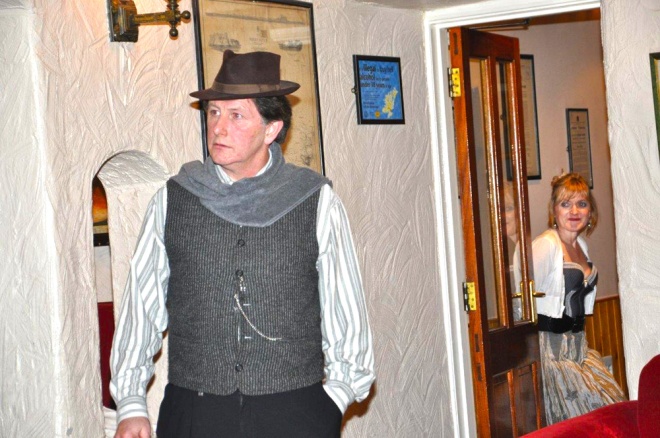 Maybe, upon advance request, they might even serve up the traditional ‘Bloomsday Irish breakfast’ of kidneys and gizzards.

Well-behaved angels all in a row! (Photo by Moses Alcorn) 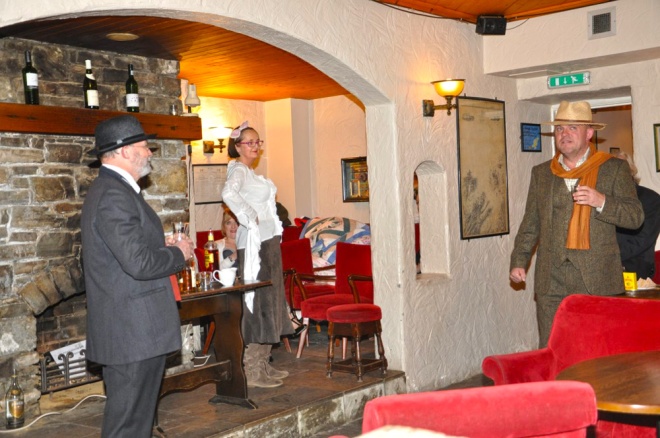 One thought on “Banned in the US and UK, but coming to Donegal soon – sex, profanity and fireworks”